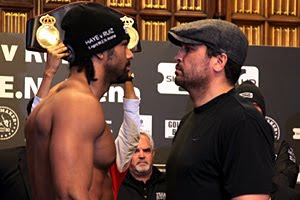 The Ruiz fight will only be Haye´s fourth as a heavyweight. Aside from beating Valuev, Haye (23-1, 22 ko´s) has knocked out Pole Tomasz Bonin in one round and American Monte Barrett in five. Despite his limited experience among boxing´s big boys, the Bermondsey Bomber has quickly become the divisions brightest star, if not its best fighter – yet. That honor goes to the giant Ukrainian brothers Vladimir and Vitali Klitschko. 6´7´´ Vladimir is holder of the IBF and WBO belts, and big brother Vitali, all 6´8´´ of him, is the WBC champion.
What Haye has in abundance, and what makes him such an appealing future opponent for the Klitschko´s, is undeniable star quality; he is good looking, always in tremendous shape, is charismatic, articulate and quick witted.
And most of all, he has an exciting fighting style and a tremendous punch.

Those last two qualities were hardly in evidence when Haye won the title from Valuev in Germany. Adopting a safety first strategy, Haye elected to box the 7´2´´, 320 lb Russian at a distance, nipping in and out with quick combinations. Haye broke a bone in his right hand in the second round, and as a result couldn’t throw the right with its usual power.
In the twelfth, Haye did let go with a hard left hook that staggered Valuev like no fighter had before in the Russian´s 52 fight career.
Haye won the fight on a highly controversial majority decision; with most of the boxing scribes at ringside believing that Haye hadn’t quite done enough to take Valuev´s crown.
As a spectacle the fight had been a dud, one writer quipping that he´d seen ”more violence and better dancing on ‘Strictly’! ”

The Valuev fight is history now, and this Saturday Haye has a golden opportunity to re-establish himself as the most exciting fighter in the division.
In John Ruiz he meets a fighter with limited power and average boxing skills, a ‘spoiler’ who uses ‘clinching’ – grabbing and holding – as a tactic. Although the WBA has Ruiz as its no.1 contender and Haye´s mandatory challenger, the 38 year old American is an unimpressive 8-5-1 since 2000, and has stopped just one quality opponent in that time – Fres Oquendo via an 11th round TKO in a WBA title defense back in April 2004.

In the American´s defense, he has performed well against quality heavyweights like Valuev and former WBA heavyweight champion Ruslan Chagaev, who Ruiz lost to on a split decision in 2006. Perhaps significantly, as if knowing his limitations, the American has steered clear of fighting either of the Klitschko brothers.

Ruiz has the somewhat embarrassing distinction of losing his WBA heavyweight crown to a former middleweight champion – not once but twice.
Ruiz lost the crown he had won from Evander Holyfield to Roy Jones Jr in 2003. Despite having huge advantages in height, weight and reach, Ruiz was soundly out-boxed by the masterful Jones, losing a one-sided decision.

Undeterred, Ruiz bounced back with his best series of results; defeating Hasim Rachman to regain the WBA belt that Roy Jones had vacated, and defending it against Oquendo and Andrew Golota, before losing it humiliatingly to another former middleweight champion, James Toney in 2005.
When Toney failed a post-fight drug test, the fight was declared a no-contest, although strangely Ruiz wasn’t reinstated as WBA champion. He did get to fight for the vacant crown, losing a majority decision to Valuev.

At 6´2´´, and a normally weighing around 235 lbs, Ruiz is not a giant by today’s heavyweight standards. He is however durable, and his only stoppage loss came in 1996, when murderous punching Samoan tank David Tua caught Ruiz cold and knocked him unconscious in just 19 seconds.
Since then, Ruiz has been in the ring with big punchers like Jimmy Thunder, Tony Tucker, Holyfield, Rahman and Chagaev, and his chin hasn’t been found wanting.

David Haye´s chin is the subject of much speculation in the boxing media. Is he, as legendary trainer Emanuel Steward recently declared, ”chinny”?
Haye´s sole defeat was a stoppage loss to Carl Thompson way back in 2004 at cruiserweight. In that fight he was floored in the fifth, and was taking shots to the head without reply when the referee stopped it. It was only Haye´s eleventh pro fight, and his inexperience was evident in the way he punched himself out in the fourth round.
Fast forward to 2007, and Haye, now challenging big punching Frenchman Jean-Marc Mormek for the WBC and WBA cruiserweight titles, showed guts, grit and determination when surviving a fourth round knockdown to ice Mormek with a big right hand in the seventh.
Haye took some good shots and was also on the canvas against Monte Barrett, although the referee ruled that a slip.

In this writers opinion, Haye´s chin is not nearly as suspect as some writers would like people to believe. Some fighters, like Frank Bruno for example, go to pieces when they are caught with a heavy shot. Frank would stand still and take punch after punch to the head before crumbling to the canvas. Frank´s chin was actually very good, it was his reaction to getting tagged that was the problem. Haye has showed in the fights with Mormek and Barrett that when he does get tagged he doesn’t panic. He deals with it, and then comes firing back.

There are an abundance of big punchers in the heavyweight division – the Klitschko brothers, Tua, the Cuban prospect Odlanier Solis, former WBC champion Samuel Peter, hulking American Chris Arreola, to name a few.
John Ruiz is not a big puncher.
David Haye is – plus he has the speed of a middleweight to go with his power.
At 6´3´´ and 220 lbs of solid muscle, Haye is also plenty big enough, and might just be the best heavyweight Ruiz has ever fought (Evander Holyfield was pushing 40 when the two had their three fight series.)

Despite Haye´s trainer Adam Booth´s best efforts to sell the fight by describing Ruiz as ”the most dangerous opponent out there”, he frankly isn’t, and Booth and Haye know it.
I´m banking on Haye to start teeing off on Ruiz right from the opening bell. The American is going to be hit hard and often, with no respite. Haye is just too quick, to powerful – too good!

I wouldn’t at all be surprised if Haye knocks Ruiz out in the first round, and I cant see it lasting beyond three.