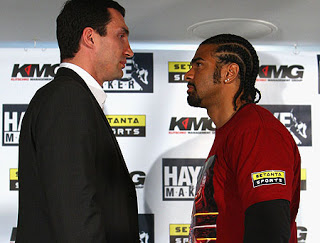 The soap opera that is the David Haye – Klitschko brothers ‘will-they-or-wont-they-fight’ show rolled into another week with the announcement that Haye would be prepared to fight WBC heavyweight champion Vitali Klitschko if the Ukrainian defeats mandatory challenger Odlanier Solis of Cuba in his next bout, according to his manager and trainer Adam Booth.

A fight between WBA champ Haye and either of the Klitschko brothers has looked increasingly unlikely in recent weeks, with Haye continuing to parlay his desire to retire before the end of the year, even though all three fighters have lined up other bouts.

IBF/WBO title holder Wladimir Klitschko has re-arranged his title defence against Derek Chisora, originally scheduled to take place last December, for April 30 at the SAP Arena in Mannheim, Germany.
Vitali will face Solis at the Lanxess Arena, Cologne in Germany on March 19. WBA champion Haye is in negotiations for a title defense against his mandatory challenger, former WBA champion Ruslan Chagaev of Uzbekistan.

Negotiations fore a spring clash between Wladimir Klitschko and Haye fell apart last week, but Booth, who has been criticized by Frank Warren over his negotiating style recently, is adamant that a meeting with Vitali could now happen.
“The Wladimir Klitschko fight is dead in the water,” Booth said. “He didn’t want it, simple as that, but David Haye’s career does not revolve around him. Unlike all the 50-odd opponents who Wladimir has fought, David is not going to sit around waiting for him. And for Chisora’s promoter, Frank Warren, to call me the hardest person to deal with in boxing, I take it as a compliment.”

On the subject of Big Brother Vitali, Booth said:
“Vitali Klitschko’s fight with Solis for the WBC title is interesting because, if Vitali wins, David would love to take him on. If Solis wins, it would be a repeat of their amateur fight.” (Solis stopped Haye in the third round in the final of the 2001 Heavyweight World Championships.)

A bout with Chagaev looks to be Haye’s most likely option, although if the British Boxing Board of Control prevent it from taking place in the UK due to concerns about Chagaev’s health – the Uzbek has had problems with hepatitis in the past – that could force Booth and Haye to look for another location for the fight, or risk being stripped by the WBA. “The other option is Chagaev, but we need to see what the British Boxing board say about clearing him here to fight,” Booth said.

Meanwhile, Wladimir Klitschko has dismissed David Haye’s retirement plans as “bulls**t!” As if taunting Haye to ‘go ahead and retire’ the Ukrainian is lining up a second title defence for 2011 with Tomasz Adamek for September in Poland.
30 year old Haye has often stated that he intends to retire in October, a date he is adamant he will keep. But ‘Wlad the Impaler’ doesn’t believe Haye and expects his rival to box on into 2012.