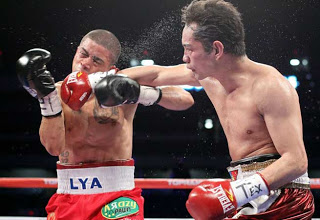 Nonito Donaire, widely regarded as the fourth best pound-for-pound fighter on the planet became a three weight world champion on Saturday night when he won a split decision over former champ Wilfredo Vazquez Jr to lift the vacant WBO super bantamweight title at the Alamodome in San Antonio, Texas.
Although Donaire showed glimpses of why he is regarded as the the heir apparent to countrymen Manny Pacquiao and American Floyd Mayweather as the number one star in boxing, in general it was a disappointing display from the Filipino, and following his frustrating performance against Omar Narvaez last October in a WBC/WBO bantamweight title defense, marked the first time he has been forced to go the distance in successive fights for six years.

Donaire upped his record to 28-1 with 18 KOs, but aside from flooring Vazquez in the ninth round, he never came close to stopping the game Puerto Rican. For for his part, Vazquez fought a defensive fight behind a high guard and focused on using his jab to attempt to score points rather than any genuine punching power. The Puerto Rican had entered the fight with a record of 21-1-1 with 18 wins by KO, but if Donaire had been expecting all-out aggression from his opponent, he was to be disappointed.

This writer had expected Vazquez to come out with all guns blazing and be taken apart by Donaire in a couple of rounds, but it was clear from the opening bell that the Puerto Rican had a game plan and intended to stick to it. That plan most likely entailed surviving the course with the über-talented Donaire rather than genuinely pushing for a victory and exposing himself to a potential knockout loss, and at that he succeeded commendably. I gave him no more than three rounds, and it was something of a surprise when the official result was only a split decision in Donaire’s favor.

In his post-fight interview Donaire confessed that he found ”the bigger guys more of a handful then he’d expected” and that he wasn’t keen on jumping up to featherweight too soon. One of HBO’s co-commentators on the fight, venerable trainer Emanuel Steward expressed his interest in one of his fighters, WBA featherweight champion Yuriorkis Gamboa and Donaire getting together. While this would be a dream matchup for fight fans the world over, right now it would appear that Donaire needs a couple more bouts at super bantamweight before moving up to featherweight.

The Filipino has scored most of his spectacular victories when he had a significant size advantage in terms of height and reach over his opponents at flyweight, super flyweight and bantamweight. His most impressive victory thus far in his career was his two round annihilation of Mexico’s Fernando Montiel last February at bantamweight. Prior to that his best win was his fifth round knockout over the previously unbeaten Vic Darchinyan to win the IBF flyweight title in 2007. 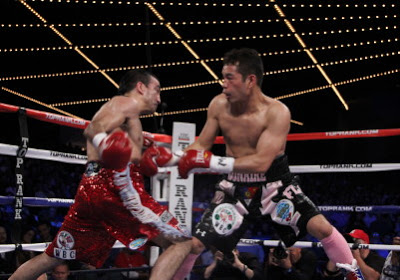 Donaire was only a half-inch taller than Vazquez, and although he looked physically stronger, he found it hard to hurt his opponent. Donaire was constantly looking to load up on his punches, and had Vazquez not put in such a stellar defensive performance, he could well have been decapitated by a Donaire left hook in the early rounds. The Puerto Rican had a rare defensive lapse in the ninth round and paid the price when he was tagged with a vicious left uppercut, but the punch landed late in the round and Donaire was unable to capitalize on his success.

Who’s next for Donaire at super bantamweight? The outstanding candidate would appear to be Japan’s 35-year-old Toshiaki Nishioka [39-4-3, 24 KOs], the former WBC bantamweight champion who has been top dog at super bantamweight since 2009. Nishioka has defeated Genaro Garcia, Jhonny Gonzalez, Ivan Hernandez, Britain’s Rendall Munroe and two weight world champion Rafael Marquez in WBC super bantamweight title fights. The 5’7″ Nishioka is a similar size to Donaire, and is a solid ring technician with excellent stamina and a good punch. He has been stopped just once in his career, in his second pro bout back in 1995.

Another excellent matchup for Donaire at super bantamweight would be against the newly crowned WBA champion Guillermo Rigondeaux of Cuba. The 5’5″ Rigondeaux is a double Olympic gold medalist and one of Cuba’s greatest ever amateur boxers. Although now 31, Rigondeaux has had just nine professional fights [9-0, seven KOs] yet is already a world champion, having destroyed talented young American Rico Ramos in six rounds last month. Rigondeaux has almost as many moves as Donaire, and may even carry greater one punch knockout power at super bantamweight than the Filipino.

The British duo of Rendall Munroe and Scott Quigg would no doubt relish the opportunity of a fight with Donaire. Munroe is currently ranked seventh in the world by the WBC, and has won his last three fights since losing his only world title challenge against Nishioka in 2010. Munroe is a big, strong super bantamweight who can handle himself and would be an excellent test for Donaire.

Quigg is just 23 and one for the future. He suffered a shock knocked down at the weekend is his eighth round TKO over light punching Jamie Arthur in a British super bantamweight title fight, so there would be no rush to shove Quigg in with a brutal puncher like Donaire anytime soon.

This writer would love to see Donaire fight three or four times this year against top quality opposition. He needs to establish himself as a super bantamweight and let his body adjust before pushing on in 2013 to featherweight and above.

Although it would be unfair to suggest that we have already seen the best of Donaire, the jury is still very much out on how far he can go in terms of climbing the weight classes [he has often expressed his ambition of emulating his hero Manny Pacquiao and eventually become a champion at welterweight], and as to his ultimate goal of being regarded as the best fighter pound pound in the world – there are three guys named Pacquiao, Mayweather and Martinez who are all looking to have stellar years in 2012, so Nonito will have to wait a little longer and score some bigger victories before that happens.