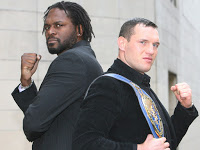 Audley Harrison says he is not interested in fighting David Haye, and has targeted a world title shot against one of the Klitschko brothers should he beat Albert Sosnowski to claim the European heavyweight title.

The 38-year-old clung on to his professional career by winning Prizefighter Heavweights III in October, and his reward is a shot at Sosnowski’s European title at Alexandra Palace on April 9.

Former Olympic champion Harrison is now convinced that his long-ridiculed dream of becoming a world heavyweight champion can come true with a victory over Poland’s Sosnowski in April.
Although he insists he is not looking past Sosnowski, Harrison says he would target a world title fight should he win, but it would not be compatriot Haye’s WBA belt he would be interested in. read more