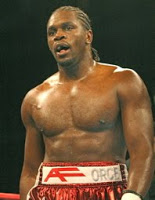 In a week that saw the almost painful admission of Danny Williams that he is a “shot fighter”, we also received the latest prophecies (some might call them delusions) of one of Williams old foe´s, Audley ´A-Force` Harrison.
Harrison could be in line for a shot at newly crowned EBU European heavyweight champion Albert Sosnowski early next year. Essex based Pole Sosnowski outworked veteran Italian former champion Paulo Vidoz for the title at the York Hall in Bethnal Green last Friday.

The 30 year old Sosonwski (45-2-1, 27 ko´s) is currently in the form of his life. In his last three bouts Sosnowski has stopped Danny Williams in eight, drawn with unbeaten Italian prospect Francesco Pianeta in a European heavyweight title fight, and now beaten Vidoz for the title. At a shade under 6´3´´ Sosnowski is always in shape, and he keeps his weight under 230lbs. A relentless, high pressure fighter who relies on his fitness, Sosnowski can box and bang. He might not be in Vladimir Klitschko´s league, but he is a much more complete fighter than Martin Rogan, for example. And we all know what Rogan did to the ´A-Force.`
Harrison is fresh off scoring three wins in one night to take the latest heavyweight installment of Sky TV´s ´Prizefighter` series. He stopped Scott Belshaw in two, scored a three round decision over Danny Hughes, and then came back from the brink of defeat to stop Coleman Barrett in two to take the title.

It was good to see Big Audley dig deep in the final against Barrett. The novice Irishman was just two punches from an upset win as Harrison, hurt and staggering, looked to have lost his appetite for the fight. But one perfect straight right from Harrison ended the contest. It was exciting stuff, and fighting three bouts in one night, even if they are three rounders, is surely no picnic. But to put Harrison’s achievement into some kind of context, Audley’s three opponents combined records were 24-2-1. Harrison raised his own record to 26-4, with 19 wins inside the distance.
Before entering the ´Prizefighter` tournament, Harrison had lost a close decision to Belfast’s Martin Rogan. Following that humiliating setback against a man having only his eleventh paid fight, it looked like Harrison had two career options left; retirement, or to continue to plod away at domestic level.

Entering ´Prizefighter` was a gamble; literally the “last chance saloon.” Elimination against a rank novice would have truly been the end of the line for one of Britain’s best ever heavyweight prospects. But the risk has paid off – at least for now.

Next up should be the Sosnowski fight, potentially the most important fight of Harrison’s professional career, but already Harrison is dreaming of beating David Haye for the latter´s WBA heavyweight crown.

Harrison, the Olympic super-heavyweight gold medalist at the Sydney Olympics in 2000 said:
“My phone is now ringing again and I want to do whatever gets me to the world title in the quickest possible way. It’s all about getting into the rankings again. There’s a lot of guys in the world top 10 to 15 who are starving for a pay-day and I’ll be happy to fight them to force a ranking.”

“David is a great addition to the heavyweights. When we were in the amateurs together, David was my little buddy. I loved him to death. He was much younger, so I showed him around a few places and gave him a lot of love. Now I would love to fight David for real in an all-British world heavyweight title fight at Wembley Stadium. It would be a fight that would break all records! It would be a great fight. There was always a great chemistry between us when we sparred. It would a kind of ‘kill or be killed’ fight, a topsy-turvy affair but I know I can take David’s best punch.

He wouldn’t be able to get rid of me and ultimately I would hit him too hard. It would be too much for him to take. I am now ready to do what I was born to do. My glory years are ahead of me.”
When asked about his age in relation to his chances, 38-year-old Harrison said;
“I am the same age as Vitali Klitschko, an age where Antonio Tarver has had his best fights. I may not become a legend and leave a real legacy as I intended but I’ve still got enough time to win a world title. I know I have said that before but there were times when I really didn’t believe it. I do now! All my stars are aligned. I’m very happily married to a beautiful wife and we’ve got a beautiful daughter. I feel very strong physically and mentally and I’m just focused on achieving my goal. It has taken longer than expected but there will be justice for me in the ring. I will keep going until I get there.”

Harrison will have to be in the shape of his life both mentally and physically if and when he gets his shot against Sosnowski, because the Pole for his part certainly will be. In a contest of pure talent and ability, Harrison, even at 38, wins hands down. But Sosnowski will want to take the fight into the trenches and test Harrison’s resolve, an area of his game that in the past he has been found wanting. There must be no doubt this time. He will have to fight above and beyond the call of duty against a man who is younger and hungrier than he is. This will be his last shot at the big time.

Harrison must win, and win impressively, and then finally people might just start to believe in Audley Harrison for the first time in many years.