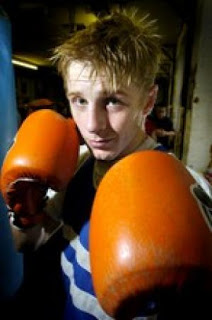 The fight is being shown live on Sky TV and is the featured fight on this weeks Friday Fight Night.

Morris, who turns 27 next week, is a replacement for Sykes´ original opponent, reigning Commonwealth champion Ricky Burns, who pulled out of the clash in favor of an apparent guaranteed crack at WBO champion, undefeated Puerto Rican Roman Martinez.

Burns’ manager Alex Morrison stated that the 26 year-old Burns, the WBO´s no.1 contender, will face Martinez in Glasgow;

“I have a cast-iron guarantee from promoter Frank Warren that Martinez has agreed to come to Glasgow to defend his WBO title, so there is a lot at stake,” Morrison said in an interview last week.

“Ricky has a lot on his mind at the moment as he contemplates his fight with Roman Martinez and he wouldn’t be up for this one mentally.”

Burns´ no-show may prove to be a blessing in disguise for 26 year old Sykes. The Scot, who has held the Commonwealth title since 2008, and is on a three year, twelve fight winning streak, looks a little too experienced for Sykes at this stage of his career. Sykes biggest test so far came when he defeated Manchester´s talented Anthony Crolla last May in an eliminator for the British title. Since then he has kept busy while he waited for his British title chance with two wins against moderate opposition. He is in his fourth year as a pro, and is undefeated in 14 fights, (4 ko´s).

26 year old Andy Morris (18-2, 6 ko´s), turned pro in January 2003. He went unbeaten in his fourteen fights, beating Scotland’s John Simpson for the vacant British featherweight title in Glasgow in 2005, and then successfully defending it with a twelve round decision over Rendall Munroe in March 2006. In retrospect, this was a huge win for Morris; Munroe went on to clean up in Britain and Europe, is the current WBC no.1 contender at super-featherweight, and may well become world champion later this year. Morris remains the only man to defeat him.

Disaster struck Morris the following year when he lost his British title in five rounds in a rematch with Simpson due to a cut above his eye. The pair met in a rubber-match in September 2007. There had been rumors that Morris was struggling to make featherweight, and certainly in this fight he seemed to have very little resistance to the talented Simpson, who dominated throughout, knocking out Morris in the seventh.

The loss obviously took some getting over, and Morris didn’t box at all in 2008. He fought three times in 2009, finishing the year with a decision over useful Frenchman Pierre Francois Bonicel.

Sykes is a Frank Maloney fighter, which in itself is a testament to his potential, as the former manager of Lennox Lewis certainly knows his boxers. Sykes win over Crolla was a thriller, which highlighted Sykes boxing ability and stamina.

Sykes and Morris have similar ring styles; both have good engines, throw a lot of punches, but with a combined ten knockouts between them, neither man can claim to be a big puncher.

The question will be how much the knockout loss to Simpson has ultimately taken out of Morris. Expect an all action, high-tempo encounter between these two, with ultimately Sykes prevailing by either unanimous decision or late stoppage to claim the British super-featherweight title.