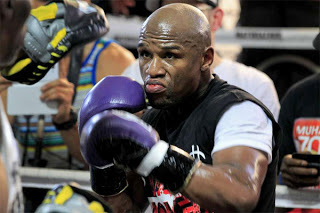 After much
anticipation, it would seem that Floyd Mayweather Jr´s opponent for his May 4
ring return at the MGM Grand casino in Las Vegas will be Robert “The
Ghost” Guerrero after all.

Guerrero had put himself in the shop window
with his sensational victory over Andre Berto last November, and most insiders
had figured that when boxing’s no:1 star eventually chose to make his return to
the ring, his opponent would be the rugged Californian.

However, there had been
intense speculation over the past few days that he would fight undefeated
Mexican sensation and current WBC light middleweight champion Saul Alvarez, but
it now seems that “Canelo” will have to content himself with a chief
supporting role on the May 4 undercard. As of yet no opponent for Alvarez has
been named, but the bout will be the sixth defense of the title he won in March
2011 with a points win over Britain’s Matthew Hatton.
Despite
turning 36 in February, Mayweather is determined to box twice in 2013, first against
Guerrero and then possibly again in September, ideally against Alvarez. One
would wonder if the news that Mayweather is already planning a second opponent for
the year would indicate that he is “taking his eye off the ball” versus
Guerrero, but Mayweather is far too seasoned a campaighner and far too fond of
his “O” to take The Ghost lightly. 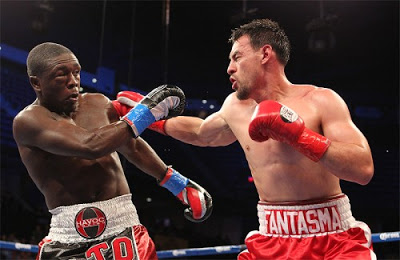 29-year-old
Guerrero (31-1, 18 KOs) is himself a two-time world champion who held the IBF
featherweight title from 2006 until 2008 and the IBF super featherweight title
in 2009. In 2011 Guerrero defeated Aussie warrior Michael Katsidis to claim the
interim WBA lightweight title, and he is currently the interim WBC welterweight
champion, a title he won with that thrilling 12 round decision over former
champ Berto in a contender for 2012´s Fight Of The Year.
Although
just 5’8″ tall (the same height as Mayweather), Guerrero has built up his
physique in a relatively short space of time, and was more than a match for the
powerful Berto. Indeed the Haitian is normally the bully in his bouts, yet he
found himself outworked for large parts of the fight against the relentless
Californian.
Mayweather´s
ring appearances have become super scarce over the past few years. If he were
to fight twice in 2013, it would be the first time he has appeared in the ring more
than once in the same year since 2007, when he defeated both Oscar De La Hoya
and Ricky Hatton in successive bouts. Mayweather looked far from his best in
his most recent fight, a 12 round unanimous decision over Puerto Rico’s Miguel
Cotto, a win that gave him Cotto´s WBA light middleweight title. Although
Mayweather won comfortably on all three scorecards, he was tagged often by the
plodding Cotto and finished the fight with his nose bloodied. Some ringside
journalists speculated that Mayweather may have taken more punches v Cotto than
in all his prior 42 bouts combined.
Mayweather
is a five weight world champion and is yet to lose as a professional, claiming
a truly amazing record of 43 victories, with 26 knockouts and no defeats or
draws. His record reads like a veritable Who’s Who of boxing, and since turning
professional in 1996 he has defeated fighters of the caliber of Genaro
Hernandez, AngelManfredy, Diego Corrales, José Luis Castillo, Arturo Gatti, Zab
Judah, Oscar De La Hoya, Ricky Hatton, Juan Manuel Marquez and Shane Mosley
amongst others.
During the last
four years fight fans the world over have clamored to see Mayweather face his
long time pound for pound rival Manny Pacquiao in what would have been the
richest fight in boxing history. However, with Pacquiao suffering a devastating
sixth round knockout at the hands of longtime nemesis Juan Manuel Marquez last
December, that fight looks further away than ever of taking place. 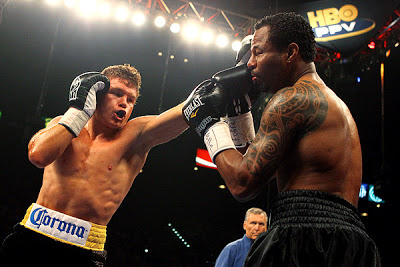 If
Mayweather is looking for one last mega payday before he bows out, a bout later
this year vs Alvarez (41-0-1, 30 KOs) maybe the best on offer. The 22-year-old
Mexican is an idol in his native land but also has tremendous crossover appeal
in United States, and has sold-out venues on both sides of the border. At
5’9″ tall, he is a chunky puncher/boxer who will be much heavier than
Mayweather on the night if and when the two ever do meet. He may not quite
match Floyd for defensive skill, but Canelo will certainly make up for what he
lacks in technique with sheer tenacity and natural physical advantages.
If Mayweather
does indeed fight twice in 2013, and during the course of the year takes on
both Guerrero and Alvarez – arguably his two toughest available opponents – and
emerge victorious from both fights, it would nothing short of a monumental achievement
from an all-ready Hall of Fame fighter.