Home Archive The Five Reasons why Miguel Cotto will defeat Floyd Mayweather on May... 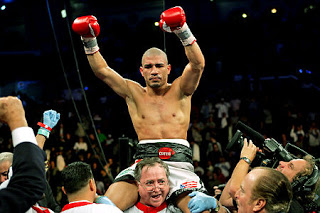 We all know that Floyd Mayweather will start a clear favorite over Miguel Cotto when the Puerto Rican three weight world champ puts his WBA light middleweight title on the line on May 5.

The majority of clear thinking fight fans (plus Floyd’s legion of fanatical followers) can clearly see that logic decrees that the unbeaten defensive genius that is Mayweather should be just too fast, too skillful and too darned unhitable for Cotto, and should therefore negotiate his way to yet another unanimous, if somewhat dull, points decision victory.

However, boxing – like all sports – is not an exact science. Upsets happen in sports – all the time. The very best MLB, NBA, NFL and soccer teams lose games every season. The worlds best golfers don’t always win the majors. The Kings and Queens of the tennis circuit suffer shock losses every year.
And great fighters lose!
Apart from Rocky Marciano all of the greatest fighters in boxing history, from Jack Johnson to Joe Louis, Muhammad Ali and Mike Tyson, Henry Armstrong to Sugar Rays Robinson and Leonard to Manny Pacquiao, and dozens more have lost, the majority more than once.
Therefore, the odds on Mayweather continuing fighting and going unbeaten throughout his career are stacked against him, and his first defeat could well come in his next bout.
Here’s five reasons why Miguel Cotto WILL beat Floyd Mayweather on May 5:
All in all, Mayweather should defeat Miguel Cotto. However, don’t be too surprised if you see Cotto’s hand being raised on May 5 to the sound of Michael Buffer announcing ”the winner…    and still… ”