Home Archive Evander Holyfield is shot and must be forcibly retired! 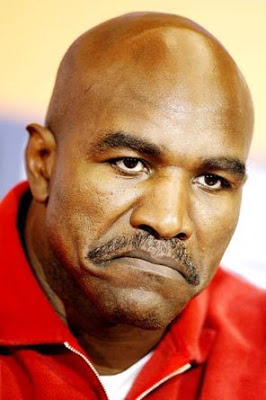 Holyfield is shot and must be forcibly retired. What happened isn’t a surprise but nobody needs to crow about it. Man! Ain’t it a shame! Isn’t everything?

I mentioned this last night. There are hundreds of shot fighters on the planet getting low tech lobotomies every time they fight. The sport is built on losers; on opponents.
Shortly after I moved to Vegas I called my friend in Vancouver. He’s a junior welter. He tells me he found a sponsor in Vegas and he’s talking about his plans. I was delighted because I hadn’t seen him in over a year. He’s about 28 at that time. I tell him, “You got a few good years left.” He came back flat and hard, “Don’t you count my years!”
I apologized immediately. I’ll never forget that little vignette. Who was I to patronize him? I wish I could have been one tenth of the fighter that he was.
At that point he had been fighting for 15 years, both amateur and pro. It wasn’t a career choice with this guy. It was who he was at a molecular level.
I do not understand all the people who talk about black eyes on boxing, the demise of boxing, how guys should be forced to fight only the best, how guys should be forcibly retired, how this; how that…
I watched a good amateur tournament last night. The BC Diamond Belt, a novice tournament with some open class fighters competing. It was a good card. We had three guys from our gym. Someday one of these kids will be a star. Boxing is eternal. Most won’t make it. I was nobody but it was the best thing I ever did. Boxing is crushed dreams for the most part. Ain’t it a shame?
In closing: I respect the sentiment. It is sad and disturbing to see anybody’s decline, but is there not just a touch of satisfaction in seeing the mighty fall, because I have watched great fighters and felt envy. Wishing I could be even one tenth what they are.