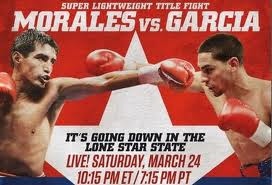 Is Erik Morales, like old rival Manny Pacquiao headed for the welterweight division? His failure to make the weight on Friday would indicate that he may be targeting a move up to 147.

Modern ring great Erik ”El Terrible” Morales takes on rising young American star Danny Garcia in the biggest fight of the weekend at the Reliant Arena in Houston Texas in the early hours of Sunday morning. The fight would have been Morales’ first defence of the WBC light welterweight title, but he surrendered his crown on the scales yesterday when he came in a full two pounds over the 140 lb limit, and then made no attempt to lose the weight. Now only Garcia can win the title tonight.

”I’m not too worried about the belt; the important thing is the fight.” Morales said through a translator. “I already won the fourth belt so it doesn’t matter to me.”
Morales became the first Mexican fighter to win world titles in four weight classes when he stopped late substitute Pablo Cesar Cano in ten rounds last September, picking up the WBC belt vacated by Timothy Bradley.
Morales went on: “I was in position to save the fight or the belt but it’s more important to save the fight. If I tried to make the weight by taking off those two pounds it would have really affected me in the fight. It wasn’t worth the sacrifice at this point for the last couple of pounds. It would hurt me. No point.”
By failing to make the stipulated weight, Morales must now forfeit $50,000 of his $1million dollar purse to Garcia, who sees his own pay packet rise to $225,000.
Garcia was less than impressed with Morales’ weight issues, and said: “I feel stuff like this hurts the sport of boxing and I love boxing” said Garcia. “For me, it’s still a championship fight but I believe what he did is a disrespect to boxing and to boxing fans. The first fight every boxer has is to make weight and he didn’t do it and I did. Now all I have to do is go out there and beat him up.”
Regarding his sudden pay increase Garcia said: “I do this for the love of the game, but if they want to give me extra money, sure, I’ll take it!”
35 year old Erik Morales (52-7, 36 KOs) is a four weight world champion who’s career looked dead and buried when he lost four straight fights between 2005-2007, including a third round knockout by Manny Pacquiao in 2006. After a three year retirement, Morales returned at light welterweight in 2010, and last April stunned boxing fans with his display of skill and raw courage in losing to Argentinian slugger Marcos Maidana by a majority decision for the interim WBA title, a fight many thought he had won.
The early rounds belonged to Maidana as he tried his best to KO the great Mexican, but despite a badly swelling right eye, by the middle rounds Morales was turning the tide of the fight, and the last half was a give-and-take thriller – making the bout a contender for Fight of the Year.
When Morales joined the pro ranks in 1993, Danny Garcia was just five years old, and when he blazed his way to his first world title, stopping the super tough Daniel Zaragoza in eleven rounds, Garcia was all of nine.
All in all Morales would win seven world world titles in four weight classes – super bantam, feather, super feather and junior welter. He would go 41-0 before losing for the first time – in a rematch with great rival Marco Antonio Barrera for the WBC featherweight title in 2002. In a Hall-of-Fame career he would defeat the likes of Junior Jones, Wayne McCullough, Barrera, Kevin Kelly, Paulie Ayala and become the last man to defeat current pound-for-pound king Manny Pacquiao, winning a unanimous decision over the Filipino in 2005, although Pacman would defeat him twice by stoppage in rematches.
His comeback has astonished critics who believed he was an accident waiting to happen, but now Morales faces one of the brightest young talents in American boxing.
24 year old Danny Garcia (22-0, 14 KOs) is a former top US amateur with some 120 fights under his belt. He is unbeaten as a pro and ranked 4th in the world by the WBC. Despite his youth and relative inexperience, Garcia is a solid 2/7 favorite to defeat Morales (bet365).
Garcia turned pro in 2007, and by 2009 was defeating quality opposition like former world title challenger Oscar Leon (TKO 3), Pavel Miranda (TKO 2) and Enrique Colin (KO 2). In February 2010 Garcia scored a ten round split decision over talented British champion Ashley Theophane. It was a good win for the young American over a tricky and experienced opponent, and hinted at things to come.
Last year Garcia scored his two biggest wins to date: a ten round decision over a 40 year old but still dangerous former WBO/WBA/IBF lightweight champion Nate Campbell in April followed by a split decision over big punching former WBO light welterweight champion Kendall Holt in October. The Holt fight was an eliminator for both the IBF and WBC titles.
Garcia is a talented boxer-puncher with an aggressive – all-action style. He was somewhat lacking defensively when he was younger, but these days adopts a European style high guard to good effect.
Much of the outcome of this fight depends on the physical condition of Morales, who despite failing to make the weight still looked gaunt and drawn, and began drinking water immediately afterward. His appearance could allude to some kind of crash weight loss system that may leave him drained for this fight. If that is the case, Garcia can win, maybe even by a stoppage.
However, I feel that after some 36 hours of recuperation, Morales should be healthy, and if anything will have a substantial weight advantage over Garcia. Despite what the bookies may think, it was always going to be a tough ask for then young America against a Morales that seems to have rediscovered his boxing mojo, and it may have just got tougher.
I see the Mexican being a little better in every department than Garcia tonight. Against Maidana, Morales finished the stronger, so stamina will not be a factor. Garcia does have a puncher’s chance, but when on form, Morales is an excellent defensive fighter with superb counterpunching skills, and I feel he will use that tactic tonight to win a unanimous decision.