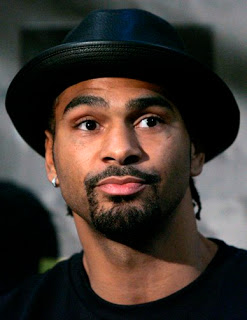 this Saturday night at the MEN Arena in Manchester. Klitschko´s trainer, the legendary Emanuel Steward, joined in the insults, branding Haye ”chinny.”

Although 38 year old Ruiz (44-8-1, 30 ko´s) is the WBA´s no.1 contender and as such Haye´s mandatory challenger, the giant Ukrainians Vladimir and Vitali Klitschko are the true powers in the heavyweight division, and have been for over a decade.
Since moving up to heavyweight two years ago, former undisputed cruiserweight champion Haye (23-1, 21 ko´s) has made a point of frequently calling out both brothers in public. He once infamously posed wearing a t-shirt showing himself holding the severed head a Klitschko in either hand, a stunt that understandably infuriated both the brothers.

34 year old Vladimir Klitschko (54-3, 48 ko´s) successfully defended his titles with a 12th round knockout of previously unbeaten American challenger Eddie Chambers before 51,000 spectators at the ESPRIT arena in Dusseldorf, Germany last weekend. Vladimir is still fuming at Haye´s decision to pull out of a huge fight with him last June with a back injury. The bout at the Veltins Arena in Gelsenkirchen, was already a 50,000 sell out when Haye withdrew the week before the fight.
Ever the professional, Klitschko still kept that date, knocking out the then WBA champion Ruslan Chagaev in nine rounds.
Haye went on to win the WBA crown in November last year with a majority decision over 7´2´´ Russian Nikolay Valuev in Nuremberg.
Although Eddie Chambers was the WBO´s no.1 contender, Klitschko now has the little matter of another mandatory defense against the IBF´s no.1 contender, undefeated Russian Alexander Povetkin to take care off. Meanwhile Big Brother Vitali will defend his WBC title against Essex based Pole Albert Sosnowski on May 29th at the Veltins Arena.

When asked about David Haye and his impending fight with John Ruiz, a visibly irritated Vladimir Klitschko told the press;
“My next fight has got to be against Povetkin, my mandatory challenger, and the only thing that will get between that is a unification fight with Haye,” said Vladimir.

”Me and Vitali have to fight between ourselves to see who fights Haye and that’s the hardest bit about it. The fight with Haye will be the easy bit. He believes he is such a smart ass. He has promoted himself very smartly, but we need to see some action from him.”

Prior to Haye´s successful challenge for Valuev´s WBA crown, there were tentative negotiations for the Brit to meet Vitali Klitschko for the WBC title. Haye eventually chose to fight the ”safer” option in the gigantic but limited Valuev. On this Klitschko said;

“Action speaks louder than words and right now he is a loser because he bitched out twice – me and then Vitali. Let us finish the talk and lets fight. It is boring now. Fans in Britain would love to see this fight. They are very supportive for David Haye, of course. He should give his own fans respect and face me.”

“I am upset with many things concerning David Haye. I have had enough and want to fight. Maybe there was a back injury, but twice in a row makes me suspicious.”

On the outcome of a fight between himself and Haye, Klitschko said;

“I will do the same to Haye as I did to Chambers if I get him. I am going to enjoy the process. He criticizes my jab, jab, grab. He will eat a lot of jabs. I will just beat him up and then knock him out in one of the late rounds. His face will be really messed up and look like a pizza when I’ve finished with him.”

But Vladimir Klitschko´s trainer, Detroit legend Emanuel Steward of the famous Kronk gym doubts that a fight between Haye and either of the Klitschko brothers will ever happen.

“I don’t think Haye is going to do anything but talk,” said Steward. “He may fight Ruiz but he will not fight a Klitschko. He should win against Ruiz but you always worry about him because he’s too chinny.”