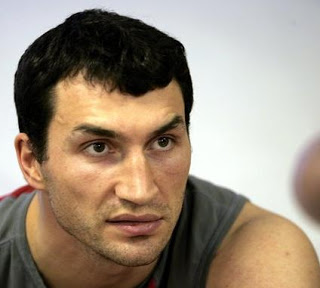 IBF/WBO heavyweight champion Wladimir Klitschko has branded Britain’s WBA title holder David Haye “a liar and a loser”, and has issued a fresh challenge to face him in a July 2nd unification bout, either in the UK or Germany.

The 34 year Ukrainian will fight Britain’s Derek Chsiora on April 30th in Germany, but is still clearly smarting over his inability to pin down his most hated rival.

“I’m right here and I’m confirming that July 2, as I said before, is the date for the fight. Either David Haye takes it or he leaves the whole thing there,” said Klitschko in an interview earlier this week.

“I think after talking so much, he has to show up in the ring. He has been trying to be smart but eventually he has put himself in the corner. He is talking about legacy but I don’t see any legacy. I’m sorry, but that is my opinion and I think the opinion of a lot of fans.”

On the subject of Haye’s often mentioned desire to quit boxing on his 31st birthday in October and go into acting, Klitschko said:

“He won’t because he talks of leaving a legacy – and what sort of legacy would that be without fighting either me or my brother, (WBC heavyweight champ) Vitali? He is bluffing, just as he always has been. I now hear he says he is going to retire and go to Hollywood to be an actor. I don’t believe it. Anyway, he is already treating boxing like Hollywood, the stupid way he conducts himself.”

He continued: “He’s telling everyone, ‘I’m going to retire by the end of the year and I will have my legacy’. He’s going to have a legacy for the Audley Harrison fight – the most exciting heavyweight fight in history. He has no legacy whatsoever. He has this terrible disease and he has to retire? What bulls**t is that? This is total nonsense. He is playing the media. He will not retire because he’s a liar, liar, liar. From the beginning to the end, he’s a loser liar. That’s the truth about this man.”

“David Haye is a piece of s**t. He has accomplished nothing in the heavyweight division other than to present himself with his stupid t-shirt and comments.”*

When asked if there were any disagreements regarding the purse split and TV rights, Wladimir said:

“We were great on the money – we split things 50/50. Of course there is a lot of money to be made, but that is not the concern right now. As I said July 2 is the date. Haye was saying ‘I don’t want you to fight before’ or whatever, but I’m not going to let David Haye tell me what to do. The date is confirmed – he has to say yes.”

He went on: “We had agreed the contracts, the money, everything but he has still found an excuse.”

”This is because I had committed to fight Derek Chisora in Mannheim on 30 April. Haye’s reaction is inexplicable. He doesn’t want to allow me to fight Chisora before I fight him but I will not be told what to do by a man who has only fought four heavyweights and whose last fight was a farce against Audley Harrison. I was happy to confirm 2 July but he doesn’t want that”

He continued: “I don’t take David Haye as a super-special fight. I don’t need a half a year to prepare for this fight. I’m always in shape anyway. Me fighting Chisora first is good promotion for the fight with David Haye because the guy is also British and very loud. It’s perfect to help promote the big fight.”

When asked whether he would prefer to fight in Germany or the UK, Klitschko’s answer was simple: “It doesn’t matter where the fight is.”

*In a press conference for his scheduled June 2009 fight with Wladimir Klitschko, Haye turned up wearing a t-shirt depicting himself holding up the severed heads of both Klitschko brothers. The stunt drew the wrath of the Klitschko’s, and sent ticket sales for the fight into overdrive. Haye would ultimately pull out just days before the fight citing a back injury.