Home Archive David Haye could be forced into Valuev rematch 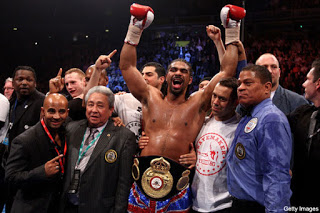 Britain´s David Haye put on a ragged yet dominant performance in retaining his WBA heavyweight title with a 9th round TKO over American John Ruiz before 19,000 ecstatic fans at the M.E.N Arena in Manchester on Saturday night.

Ruiz, himself a former two-time WBA champion, was taking heavy punches to the head in the ninth round when his trainer Miguel Diaz threw in the towel, indicating to referee Guillermo Perez that his man had had enough.

29 year old Haye (24-1, 22 ko´s) and his trainer Adam Booth claimed that a cut eye sustained a month earlier had limited Haye´s sparring leading up to the fight, resulting in what was an exciting but erratic performance by the Bermondsey Bomber.

38 year old Ruiz (44-8-1, 30 ko´s) surprised Haye by starting the contest as the aggressor and taking the fight right to the champion, but Haye responded with a booming straight right that felled the American within the first 30 seconds of the round. In his attempts to finish off Ruiz, Haye, who is normally a quality finisher, threw wild hayemakers that were well short of the target. Haye did manage to send Ruiz to the canvas a second time after delivering several hard shots to the back of the American´s head, an action which resulted in the referee instructing the ringside judges to deduct a point from Haye.

Considering the battering he had taken in the first, Ruiz came back surprisingly well in the next three rounds, with relentless forward moment and a solid left jab. Haye´s timing was still way off, and he was doing more posing than punching.

All that was to change in the fifth when Ruiz was clubbed to the canvas again. From then on it was one way traffic. Ruiz was down again in the sixth, and although to his credit he never stopped coming forward, by now he was taking a pummeling.
Ruiz´ battered bloody nose had clearly been broken again, and his face was swelling badly. In the ninth round his corner had seen enough and threw in the towel to save their fighter any further punishment.

Game as Ruiz was, his complete lack of any kind of punching power ensured he was unable to capitalize on Haye´s frequently sloppy defense.

The victory was Haye´s first defense of the title he won on a close decision over giant Russian Nikolay Valuev last November. While the British public will now clamor for Haye to fight either IBF and WBO heavyweight champion Vladimir Klitschko or his brother Vitali, the WBC champion, Haye is nowhere near ready for that kind of challenge.

Adam Booth knows Haye, who was taking part in only his fifth heavyweight fight after moving up from cruiserweight, needs more heavyweight experience before facing a Klitschko, and there are numerous possibilities for his fighter.

Audley Harrison wants to fight Haye if he wins the European title next week. Tomasz Adamek and Chris Arreola are going to tear lumps of each other when they fight later this month, and a Haye fight against the winner would be big box office. Then there is the 24 year old Russian sensation Denis Boytsov, a good looking undefeated kid with a style similar to Mike Tyson´s. Haye v Boytsov would be big box-office in Britain and Europe.

But a return-match clause in the contract Haye signed with Sauerland Event of Germany to get the title shot against Valuev calls for a rematch between the two, however unappealing that fight might be. If Valuev and Sauerland Event choose to invoke that clause – which looks likely, Haye will be forced into fighting the Russian next.

Adam Booth says Haye will be taking the summer off, so we could be looking at Haye v Valuev 2 at the M.E.N in October.