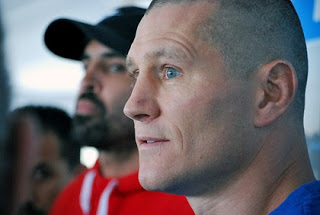 DANNY Green has granted Paul Briggs his wish — a shot at a title — three years after he was forced to give up boxing on medical advice.

“I’m giving Briggs the opportunity of lifetime. He’s got nothing to lose,” Green said.

At stake for Green is his IBO cruiserweight world boxing title next month, when he steps back into the ring against former sparring partner Briggs.

Green has had some bruising training sessions in the past with Briggs, who twice fought Poland’s Tomasz Adamek for a light heavyweight world title.

“They were almost blood wars. The thing about Briggs as a fighter is his incredible willpower.

“He has also got a cult following from his kickboxing days and what I’m offering him is a chance in a lifetime for him.

“If he comes out on the night in July and beats me, then the world is his oyster, but that ain’t going to happen.”

“Hurricane” Briggs, a former world champion kickboxer and DJ, said he had overcome the problems with his adrenal gland and nervous system, which forced him to quit and take up work as a TV commentator.

Briggs, who comes from a family of Kiwi fighters, had his last bout in February 2007, against South African Rupert van Aswegen.