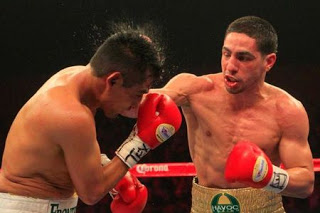 24 year old Danny Garcia won a twelve round unanimous decision over Mexican legend Erik Morales (52-8, 36KOs) to win the vacant WBC junior welterweight title at the Reliant Arena in Houston, Texas on Saturday night.
Only Garcia could have left with the belt – Morales surrendered his title when he failed to make weight on Friday, coming in a full two pounds over the 140 lb light welter limit.

Morales began the fight cagily, using his jab and defensive skills to keep the highly touted Garcia at bay. However, by the middle rounds the Philadelphian was in control, and dominating the exchanges. Morales came on strongly in the tenth and appeared to break Garcia’s nose. His momentum was halted in the 11th when Garcia floored him with a tremendous left hook. Had the younger man not lost time getting a warning from the referee for hitting on the break, he may have been able to force a stoppage. To add insult to injury, Garcia was cut late in the round.

“He’s a normal fighter, not a great fighter, but it seems like my age caught up to me tonight,” said a crestfallen Morales, the first Mexican to win world titles in four weight divisions, doing so at junior feather, feather, junior light and light welterweight.

Garcia was understandably ecstatic after his victory – “It’s been a long way, everyone wants to be a champion.” Garcia said emotionally. “My dad (trainer Angel Garcia) stuck by my side and we did it. I knew it was going to be a bloody war. I couldn’t let him take my dreams away.”