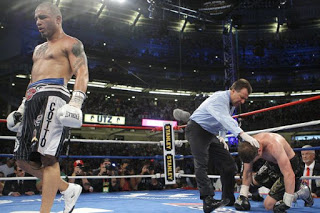 NEW YORK — Miguel Cotto watched the white towel fly into the ring, the universal sign of surrender, and thought he’d won the first main event at Yankee Stadium in more than three decades.

Dozens of people flooded through the ropes while Yuri Foreman limped around and implored referee Arthur Mercante Jr. to allow the match to continue. His badly twisted right knee kept him from doing much, but his indomitable heart would not allow the fight to end with him on his feet.

Cotto made sure it didn’t, finally stopping Foreman in the ninth round Saturday night to win the junior middleweight title and delight thousands of his flag-waving fans at the Bronx ballpark.

Miguel Cotto handled Yuri Foreman for much of Saturday night’s fight, but sealed the deal when Foreman lost his mobility with his knee injured.
“I proved this night, everybody who said Miguel Cotto was finished, everybody failed,” he said.

Cotto (35-2, 28 KOs) set the tone early with his left jab and was easily ahead on all three scorecards when Foreman slipped in the seventh round and hurt his right knee, which was already wrapped in a black brace because of a previous injury. Foreman slipped again later in the round, getting tagged at will by Cotto, before limping back to the corner at the bell. read more