Home Archive Can Stephen Foster Jr continue to emerge from the shadow of ‘The... 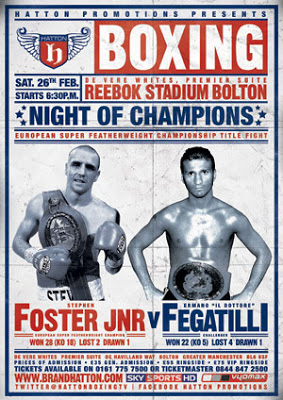 Foster stunned the experts when he flattened big punching Levan Kirakosyan to take the title, and his fans will be looking for another impressive performance from the man who is currently world ranked 11th, 10th, and 8th by the WBC, WBA and IBF respectively, and will climb higher if he impresses against former EU champion Fegatilli on Saturday.

The card at the Reebok also features unbeaten UK fighters Craig Lyon and Joe Murray plus the hulking 6′ 8” heavyweight prospect Richard Towers and is promoted by Ricky Hatton’s Hatton Promotions. The Foster v Fegatilli fight will be shown live on Sky Sports 1, the action begins at 8pm.

30 year old Foster (28-2-1, 18 ko’s), the son of former Commonwealth middleweight champion and Salford cult hero Steve ‘The Viking’ Foster, has developed into an outstanding boxer-puncher in his own right. An excellent amateur who won back-to-back ABA titles in 2000 and 2001, Foster turned pro after his second ABA victory under the management of Frank Warren, and was unbeaten in his first twenty two fights, scoring fourteen knockouts.

Foster’s rapid progress was to be derailed when he ran into Liverpool stylist ”Dirty” Derry Mathews at the M.E.N Arena in Manchester in October 2006, losing a one-sided unanimous decision and with it his WBU title.

After two comeback victories, Foster challenged Edinburgh’s Alex Arthur in December 2007 for the interim WBO featherweight title, and again suffered a points defeat, although this time it was a close, competitive fight against a world ranked opponent.

Foster took almost a year away from boxing following the loss to Arthur, and when he returned he went largely under the radar with a series of four – six-round bouts. When it was announced that Foster would challenge Levan Kirakosyan for the European super featherweight title it was with neither much fanfare nor much hope.

The powerfully built French based Armenian, although nearly 37 years old, possessed legendary punching power and had flattened Scott Lawton in three rounds to win the vacant title last February, successfully defending it with a two round knockout of Francisco Nohales five months later.

However when the two met last October in Bolton, it was Stephen Foster Jr who finally emerged from his father’s shadow. In an an electrifying performance, Foster absorbed several block-buster shots from Kirakosyan in the first two rounds to bounce back and ice the Armenian in the third for a truly stunning and sensational victory, one of the outstanding performances by a British fighter in 2010.

Foster is an immensely likeable character, mild-mannered and always respectful to both his opponents and the media. He is a young 30 with very little ware-and-tear to show for his first ten years as a pro and hopefully his best years are still to come. A world title shot in 2010 would seem a distinct possibility, but first he must deal with his mandatory European challenger in the Reebok Stadium on Friday, and it is a challenge he refuses to take lightly:

”I am going in there with the mind-set like I am a challenger and training harder than ever.” said Foster at a press conference. ”I have put so much in to get this far. It does feel different now that I am a champion, but that doesn’t mean I am under-estimating Fegatilli.”

”Life hasn’t really changed for me since becoming European champion.” said Foster. ”I’m still the same and, in my preparation for this fight, I’ve been thinking like I’m the underdog again and it’s me fighting for the title. I’ve done all my hard training – I’m totally prepared.”

”The important thing is to make sure there are no slip-ups. I’ve got to get this fight out of the way before I can think of anything else. I hope the Burns fight happens, but I can’t worry about him. I have just got to keep winning and see what happens.”

26 year old Ermano Fegatilli (22-4, 5 ko’s) must surely rival if not surpass Welsh light heavyweight Nathan Cleverly as the brainiest boxer in Europe. Cleverly may have gained his degree in mathematics from Cardiff University last year, but Fegatilli holds a masters degree in economics, gained in 2007 from the University of Liege, speaks five languages – French, Dutch, English, Spanish and Italian, and works as a consultant at the University Hospital of Liege.

Fegatilli turned pro in 2005, boxing extensively in his native Belgium but also competing in Italy, Germany and Luxembourg. He lost a ten round decision to unbeaten Italian Devis Boschiero for the IBF Youth super featherweight title in December 2006, one of only two losses Fegatilli sustained in his first fourteen fights. In May 2007 he captured the E.U. version of the European super featherweight title with a decision over Italian Antonio De Vitis.

He lost the title in his first defence when he dropped a razor thin split-decision to Spaniard Jesus Escalona that November. The following year he lost for the last time, dropping a decision to the then undefeated and future WBC super featherweight champion Vitali Tajbert of Kazakhstan.

Since the loss to Tajbert, Fegatilli has marked time with eight straight victories. Apart from a win over Jesus Escalona in a rematch, his most recent opposition has been moderate, to say the most.

His fight against Foster on Friday will possibly be quite unlike anything he has come across before in terms both of the atmosphere in the Reebok Stadium and the intensity of Fosters fans. Of the opponents Fegatilli’s has faced during his six year career only Vitali Tajbert can be placed in the same class as Foster as a fighter, and the Kazakh, while a skilled technician, is no puncher.

Fegatilli was recently quoted as saying: ”Boxing is a wonderful sport which combines so many values such as discipline and spirit. It takes more than intelligence to pass the exams I had to pass. It takes discipline and spirit, the exact same values as boxing. I am also a highly competitive person that likes to compete on all levels, not only on the part of intelligence. I want to test my body and spirit all the time.”

Another young Belgian, 21 year old Stephane Jamoye put on a tremendous display when losing on a majority decision to Jamie McDonnell in a European bantamweight title fight in January, and has already bounced back with a victory.

Whether Fegatilli is made of the same stuff as Jamoye we will have to wait and see. If the going gets tough, and Foster starts to connect with hurtful head-shots later in the fight, something tells me that a man as intelligent as Fegatilli and as aware of the damage his brain may be sustaining, may decide he has other things in his life.

Foster by TKO in eight.