Home Archive Can Manny Pacquiao Bounce Back From His KO Loss to Marquez and... 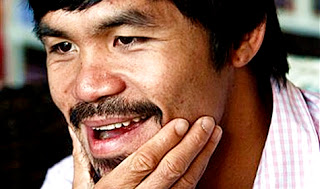 Before December 8 2012, there were several things in life that were a given; death, taxes, Meryl Streep getting an annual Oscar nomination and Manny Pacquiao being one of the best fighters – pound for pound – on the planet.

Then came his fourth encounter with long time nemesis Juan Manuel Marquez (he of the ever increasing muscle bulk) and that cataclysmic straight right hand, just as Pacquiao was delivering the coup-de-grace upon the Mexican and about to put himself back on top the P/P rankings.

Up to that moment Pacman had looked terrific. Sure, he had hit the deck briefly in the third round, but aside from that, he had been back to his human-buzz-saw self, as good as the night he thrashed Miguel Cotto, all flailing fists and perpetual motion. There had been none of the happy-slappy, touchy-feely constant glove touching that had marred his strangely pacific performance a year earlier against Marquez – this time Manny had taken a leaf out of  the Mike Tyson boxing handbook and was throwing every punch with “bad intentions.” 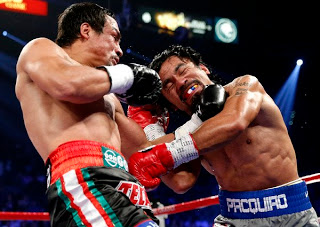 Then came the most perfect punch that Juan Manuel Marquez will ever throw, even if he chooses to surpass Archie Moore for career longevity. Suddenly and instantaneously Pacquiao´s world was quite literally turned upside down. He had been knocked cold – again. It had taken him sixteen years to erase the memory of the last time that had happened – to Filipino journeyman Rustico Torrecampo in February 1996. (Pacquiao would be stopped again three years later – by Medgoen Singsurat – but not KO´d.)

In the ensuing years Pacquiao would come through dozens of fights, many of them tough, several of them veritable pier six brawls. And despite suffering those two early career inside the distance losses, his chin would look nothing short of concrete throughout. He would take the best that Marco Antonio Barrera, Erik Morales, the aforementioned Marquez, David Diaz, Oscar De La Hoya, Miguel Cotto, Joshua Clottey, Antonio Margarito and Shane Mosley – each and every one of them a respected bomb-thrower in their own right – and shrug them off as if they were nothing more than pesky mosquito bites. 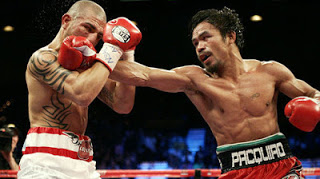 And then came that straight right from Marquez, and suddenly it was as if he was back fighting on an undercard that night sixteen years earlier in Mandaluyong City. Suddenly he´d been knocked out cold again. Suddenly it was if all the glory years, all the sensational victories and unprecedented achievements, all the world titles, had never happened.

Of course the truth is Pacquiao´s truly astonishing career and unique ring CV has truly happened, and his loss to Marquez, however dramatic, should not diminish any of it – although no doubt, at least for now – in the eyes of some fight fans – it will. For example, Floyd Mayweather´s legion of supporters will of course be crowing and telling anyone who listens “See! That´s what would have happened if they had fought.” However, in all likelihood, the only man who could have done that to Pacquiao was Marquez himself. No-one knew his style better, no-one was less intimidated by him, and no-one else could have timed his attack late in round six to such perfection.

Many fight fans, and even some Pacquiao fans, would love to see him call it a day, but he won´t, and nor should he. He must redeem himself while he is still relatively young and still has the physical means to do so. If he were to come back and face Marquez for a fifth time and win spectacularly – for example inside of three rounds – his December loss, while not quite eradicated from our memories for all time, would lose a lot of its potency  And if Pacquiao were to come back from such a bad defeat and crush Marquez emphatically, he would once again be vying for that top-spot in the P/P ratings.

Will he be able to do it? If he and Freddie Roach work intensely together for three months and come up with the perfect battle plan, there is a very good chance that both of them (Roach after all is on a worse losing streak than Paquiao) can see their respective careers rejuvenated. Despite the KO loss, I would be very surprised if Pacquiao were not the bookies favorite if and when the fifth installment comes around. 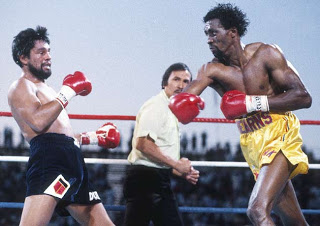 There have been precious few examples of great fighters who have come back from KO losses in their 30´s and reached anything like their prior level. Roberto Duran is an exception – suffering a vicious two-round KO to Tommy Hearns in 1984 when he was 33, yet eventually winning a fourth world title at middleweight some five years later. It took Duran a long time to rebuild his career – and his shattered confidence. Even though he was never quite the same fighter again, he was still pretty damn good.

And a ´´still pretty damn good“ version of Manny Pacquiao will still be too good for most welterweights out there.