Home Archive Can the ”King” return to the top? Arthur Abraham takes on Piotr... 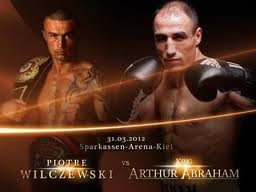 Former IBF middleweight champ ”King” Arthur Abraham takes on dangerous Pole Piotr Wilczewski for the WBO European super middleweight title at the Sparkassen-Arena in Schlewig Holstein, Germany tonight.
Abraham made 10 successful defenses of his IBF middleweight title before stepping up to 168 lbs and competing in the Showtime Super Six World Boxing Classic, where despite posting a 1-3 record, he reached the semifinals. Wilczewski is a tough, awkward customer who has been ranked in the world’s top-ten and was unlucky not to get the decision over Britain’s James DeGale in a European super middleweight fight last October.
32-year-old Abraham [33-3, 27 KOs] returned to action in January of this year with a less than convincing fifth round knockout over Argentinian Pablo Farias. Despite boasting that he was ready to regain a version of the middleweight title in 2012, Abraham looked out of sorts at times during the first four rounds of the fight. However, when Abraham opened up in earnest if round five, his power combinations and finishing looked world class, admittedly against a man who suddenly acted as if he had awoken a bear and wished he hadn’t. Three knockdown, all the result of wide hooks from both flanks to the head and body did the trick.
Part of the reason for Abraham’s less than totally impressive showing could be the result of experimenting with his fighting style. Although for large periods of the fight against Farias, Abraham was still employing the familiar high ”peekaboo” style guard employed by himself and most of his trainer Ulli Wegner’s fighters, he was also experimenting with carrying his left hand low, a-la Carl Froch, one of his conquerors in Super Six. 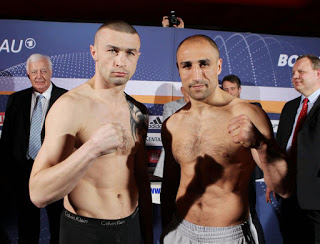 Physically Abraham looked in great shape, although the fact he scaled a rock-solid 167 pounds at the weigh-in and possibly more in the ring does not bode well for his ambitions of returning to the middleweight ranks.
What seemed to let Abraham down more than anything in Super Six was the one-dimensional style he has used throughout his career. Abraham loves to trundle forward behind his high guard like a tank, deflecting shots off his arms as he moves into punching range, where he can release his own powerful blows. This tactic worked extremely well for him until he ran into American Andre Dirrell in March 2010. The rangy 6’2″ Dirrell out boxed Abraham like no fighter ever had before, using a huge, fast southpaw jab, a hard left cross that floored Abraham for the first and only time in his career in round four, tremendous footwork and side-to-side movement.
Abraham was a mile behind on points when he cold-cocked a prone Dirrell – who had slipped to the canvas – with a right hand that rendered the American unconscious and got himself disqualified – his first pro defeat.
Six months later Carl Froch took the blue-print laid down by Dirrell and gave Abraham an even bigger boxing lesson – winning all twelve rounds on two judges scorecards.
Fight fans the world over know of Arthur’s indomitable fighting spirit – proved beyond doubt when he battled on with a broken jaw to outpoint Colombian slugger Edison Miranda in 2006, despite his opponent targeting the injury with his fists and his head. They know of his world-class punching power, emphasized in his only victory in Super Six, a chilling 12th round knockout of former middleweight champion Jermaine Taylor – a simple straight right hand that put the American in a Berlin hospital for three days with severe concussion.
However, those qualities were proven not to be enough to win at the top end of the super middleweight division. Will they be good enough against the likes of Sergio Martinez, Felix Sturm, Julio Cesar Chavez Jr, Daniel Geale, Dmitriy Pirog and even Britain’s trio of top middleweights – Darren Barker, Matthew Macklin and Martin Murray?
On Saturday Abraham takes on a dangerous opponent in 33 year old Pole Piotr Wilczewski [30-2, 10 KOs], who despite his relatively low knockout ratio is a hurtful puncher and a solid boxer.
Turning pro in 2004, Wilczewski was unbeaten in his first 22 bouts before he was TKO’d in three rounds by talented but underachieving American Curtis Stevens in 2009 at the Prudential Center in Newark, New Jersey on the undercard of his countryman  Tomasz Adamek’s IBF cruiserweight title defence against Bobby Gunn.
In retrospect that now seems something of a freak result – Stevens is a good, hard-hitting fighter who caught Wilczewski in the right place and the right time. Against DeGale in his only other defeat last year, Wilczewski’s chin looked solid, and no one can question the British Olympian’s punching power.
Wilczewski’s best win came in March 2011 when he TKO’d the ageing but once much-vaunted Finn Amin Asikainen in eleven rounds to win the European super middleweight crown and the WBO Intercontinental belt. His next bout seven months later was the loss to DeGale which could have gone either way. Last time out he won an eight round split decision over British based Serb Geard Ajetovic in Poland – a talented journeyman with a habit of giving quality fighters a hard night.
Despite just ten KOs in 30 wins, Wilczewski does punch hard, especially with a winging left hook. He had DeGale in serious trouble several times in their fight with rights as well as the left hook, and could hurt Abraham if given the opportunity. The downside for the Pole is that he has limited movement and likes to stand right in front on an opponent – often with his left hand low, which will surely be suicidal tactics against a bomb thrower like Abraham. Indeed, if one were to look for the perfect, credible opponent to make Arthur look great – Wilczewski would fit the bill.
This should be exciting, high-octane stuff while it lasts. There will be some ferocious exchanges early on, but by round three Wilczewski will start to ship a lot of punishment to the head and body. The more he tries to slug with Abraham, the more he will get tagged, and I see the Armenian ending things in violent fashion via a fifth round knockout.