Home Archive Can the ”Filipino Flash” come through his toughest test? 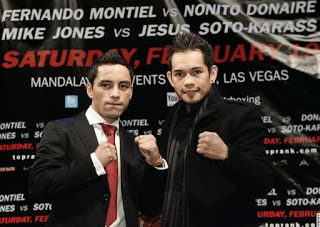 The man fight fans call ”the New Manny Pacquiao”, Nonito Donaire attempts to continue to emulate his ring idol when he takes on the formidable three-weight world champion Fernando Montiel for his WBO and WBC bantamweight titles at the Manderlay Bay Resort and Casino in Las Vegas in the early hours of Sunday morning.

It is the second superfight of 2011, coming two weeks after Timothy Bradley’s light welterweight unification win over Devon Alexander. That fight was something of a dud – this is expected to be a thriller. Both men can box and bang; Donaire has stopped eight of his last nine opponents, Montiel has iced nine of his last eleven. As they say in boxing and in life; ”Something’s Got to Give!”

Nonito Donaire was born 28 year ago in General Santos City, the second largest metropolis in the Philippines, and also the birthplace of the worlds greatest current fighter, Manny ”Pacman” Pacquiao. When Donaire was ten years old his family moved to the United States, and he lives in San Leandro, California whilst maintaining strong ties with the country of his birth and visiting to celebrate after every victory.

After an outstanding amateur career that saw him win a Junior Olympic gold medal in 1999 and an American National Championship in 2000, Donaire turned professional in 2001 and promptly lost a decision in his second pro fight. He has not been beaten since.

Brought along steadily on a diet of second rate opposition, Donaire largely went under the radar with mainstream fight fans. When he signed to meet the fearsome Australian based Armenian Vic ”Raging Bull” Darchinyan for a shot at the IBF flyweight title, the omens didn’t look good for the baby faced twenty-three year old; the unbeaten Darchinyan is a murderous puncher and had beaten Nonito’s older brother Glen in a title fight the year before.

In a contender for Upset of the Year 2007 – Donaire showed no respect for the Aussie’s fearsome reputation and put on a masterful display of boxing for the first four rounds that was reminiscent of Clay v Liston in 1964.
In the fifth round Donaire caught the incoming Darchinyan with a picture perfect left hook to the chin, knocking him down heavily. When he arose, Darchinyan was, as the Americans love to say, on ”queer street”, and the fight was stopped. Boxing had a new and unexpected star.

In the following three years Donaire has done nothing but enhance his reputation in the ring to the point where he is now rated no.5 on The Ring Magazine’s pound-for-pound list, behind only Pacquiao, Gabriel Martinez, Floyd Mayweather Jr and Juan Manuel Marquez.

Donaire has stated his intention is to climb the weight classes like his idol Pacquiao, at least as high as 130 lb (lightweight) and maybe further. Pacquiao’s fist world title was also at flyweight. He is currently WBO welterweight champion.

After three successful IBF title defenses, Donaire moved up to super fly and defeated tough Panamanian Rafael Concepcion to win the interim WBA super flyweight title. Last May he defended that title against 21 year old Mexican knockout sensation Hernan ”Tyson” Marquez.
The youngster may yet go on to greatness (he will fight Luis Concepcion for the WBA flyweight title in April) but that night he faced a Donaire on top of his game – switching effortlessly from southpaw to orthodox when he chose, and controlling the fight masterfully.
A huge left uppercut floored ”Tyson” in the eighth, and although he got to his feet, the referee waved the fight off.

If Donaire was at his most masterful against Marquez, then he was at his most savage in his last outing – against Ukrainian hard-man Volodymyr Sydorenko, a former WBA bantamweight champion.
In a chilling performance, Donaire took the brave Ukrainian apart in four one-sided rounds, flooring him three times and leaving his face a bloody mask.

So far in his career Donaire has enjoyed an almost freaky size advantage over his rivals. Tall for a bantamweight at 5′ 6”, he seems taller and wider than all of his foes, like a lightweight masquerading as a flyweight.
With those physical advantages coupled with his frightening natural ability, Donaire’s toughest opponent will be himself.
He hits just as hard with both hands, and is just as comfortable boxing at southpaw or orthodox. He has amazing hand and foot speed, and an excellent boxing brain. It is a scary package for any opponent to face, but on Sunday Donaire will face a man with the tools to derail his phenomenal progress.

31 year old Fernando Montiel is the latest in a long line of great Mexican bantamweights. Just as America can lay claim to the heavyweight division, historically, the 118 lb class has been the happiest hunting ground for Mexican fighters, graced by names like Olivares, Castillo, Herrera, Zarate, Zamora, Pintor, Morales and Barrera.

If Nonito Donaire is lauded as the heir apparent to the Kingdom of Manny Pacquiao, Montiel is the heir to the Kingdom of Juan Manuel Marquez. Ranked 7th pound-for-pound in the world by The Ring Magazine, just two places behind Donaire, the Mexican has been been involved in an astonishing 21 world title fights since December 2000, winning 19 of them, and only losing the other two on controversial decisions.

Montiel turned pro in December 1996, aged just 17. He made rapid progress, and took a 20-0-1 record (15 ko’s) into his first world title fight against fellow Mexican Isidro Garcia in September 2000. Montiel won the fight on a seventh round TKO and with it the WBO flyweight title.

After three defenses, Montiel stepped up a division in June 2002 and defeated previously unbeaten Panamanian Pedro Alcazar for the WBO super flyweight tile on a sixth round TKO. Tragically, the 27 year Alcazar collapsed and died 36 hours after the fight due to an undiagnosed brain injury.

No doubt suffering from the after effects of the Alcazar tragedy, Montiel lost his title the following year to slick American veteran Mark ”Too Sweet” Johnson on a majority decision.

Montiel stayed active with three knockouts in 2004 as he bided his time waiting for a rematch with Johnson. It never came, and instead in April 2005 Montiel met the American’s conqueror Ivan Hernandez for the title, regaining the belt with a seventh round knockout.

In May 2006 Montiel lost for the second and last time when he came up short in a challenge for Jhonny Gonzalez’s WBO bantamweight crown, losing on a split twelve round decision.

After a total of eight defenses of his WBO super flyweight title, Montiel turned his attention in earnest to the bantamweight division, and in March 2009 captured the WBO’s interim belt with a 3rd round knockout of Diego Oscar Silva.
Last February, he iced unbeaten Filipino Ciso Morales in one round for the WBO’s full bantamweight title.
Two months later, Montiel let the first three rounds slip against Hozumi Hasegawa before blitzing him with a barrage of power punches late in the fourth round. It was a sensational performance in Hasegawa’s native Japan, and earned Montiel the WBC bantamweight crown.

Montiel proved beyond any doubt that he is in the form of his life when he destroyed Rafael Concepion in three rounds last July – the same Rafael Concepion who had taken Nonito Donaire the distance the previous year.
To round out an amazing 2010, Montiel blasted out Jovanny Soto in two rounds in a December non-title fight.
Can Montiel defeat Donaire? He certainly has the power and the style to beat the Filipino. Sleek and slim with smooth boxing skills, Montiel is possibly the most lethal counter puncher in the world today, and proved that empathetical against the normally cement chinned Hasegawa, who had held the WBC championship for five years.
All Montiel needs is the slightest window of opportunity and he has the speed, power and reflex to capitalize on it. In that way, he reminds this writer of the great Mexican bantamweight of the 1970’s, Carlos Zarate.

For all of Montiel’s undoubted ability, I feel Donaire has just too many advantages. Like a schoolyard bully terrorizing the smaller boys, Donaire looks invincible at flyweight and bantamweight, and will probably only be seriously tested when he climbs to featherweight and tackles the likes of Yuriorkis Gamboa, Juan Manuel Lopez and Chris John.

However, despite his size, power and talent, I cannot see Donaire taking too many risks against such a lethal, clinical puncher as Montiel. I see Donaire keeping the fight at long range, boxing from the outside, switch-hitting when necessary and piling up points to take a unanimous twelve round decision.