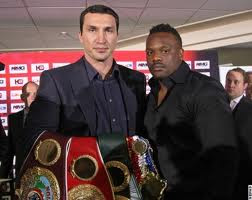 British and Commonwealth heavyweight champion Derek Chisora attempts to climb a proverbial mountain on Saturday night when he challenges the mighty Wladimir Klitschko for his IBF and WBO heavyweight title belts at the 15,000 capacity SAP-Arena in Manheim, Germany.
Klitschko v Chisora is part of Sky TV’s ‘GR8 BRITAIN VERSUS THE WORLD’ package that features eight title fights. Action starts at 8pm on Sky Box Office.

Klitschko made five defenses of the WBO title he won on a 12 round decision over Chris Byrd in October 2000 before losing it via a two round knockout to South African Corrie Sanders in 2003. He won the IBF title, again against Byrd, this time with a seventh round TKO in April 2006. He regained the WBO belt in 2008 with a decision over Sultan Ibragimov. In his second title reign he has added nine more defenses to his tally.

Born in Kiev, Ukraine 34 years ago, the 6′ 7” Klitschko (55-3, 49 ko’s) is universally recognized as the finest heavyweight on the planet and one of the current pound-for-pound top five fighters in the world. He and older brother – WBC heavyweight champion Vitali have big brains to match their immense brawn: both brothers are multi-lingual – fluent in Ukrainian, Russian, German and English, and both hold Ph.D’s in sports science.

After an outstanding amateur career that saw him win 136 out of 140 fights and climaxed with Gold in the super heavyweight class at the 1996 Olympics in Atlanta, Klitschko turned pro in Hamburg in November ’96 with a one round knockout of Fabian Meza.
The young Klitschko progressed at a break-neck pace, going 24-0 with 23 ko’s until he ran into tough American journeyman Ross Purity in December 1998. Purity, big and cagey, absorbed a shellacking from Klitschko before coming on strong later in the fight and TKO’ing the Ukrainian in the 11th round.
Klitschko weighed just 225 lbs for the Purity fight, and in future would never enter the ring lighter than 235 lbs.

Klitschko’s career was soon back on track, and knockout wins over Axel Shulz, Paea Wolfgramm and Monte Barrett earned him his aforementioned WBO title winning fight with Chris Byrd.

Aside from his subsequent shock loss to Sanders, Klitschko was also TKO’d in five rounds by hard hitting American Lamont Brewster in a bout for the vacant WBO heavyweight title in April 2004. It remains Klitschko’s last defeat to date.

Like Joe Louis, Muhammad Ali, Mike Tyson and Evander Holyfield before him, Klitschko is respected the world over as a champion who ducks no-one, and his record reads like a ‘who’s who’ of heavyweight boxing from the last two decades, with victories over such stellar names as Sam Peter (twice), Eddie Chambers, Ruslan Chagaev, Hasim Rahman, Tony Thompson, Sultan Ibragimov, Lamont Brewster, Jameel McCline, Ray Mercer and Franz Botha among many others.

In his last fight, Klitschko didn’t look like a fighter who was slowing down, stopping former WBC heavyweight champion Samuel Peter of Nigeria in ten one sided rounds. This was the same Sam Peter who floored Klitschko twice and gave him all he could handle in their 2005 fight, and had looked back to his big punching best in his four knockout wins leading up to the Klitschko fight. If nothing else, Peter was given a strong punchers chance.
The problem for Peter, and for all of his recent opponents, is that Klitschko is a vastly improved fighter from 2005. He controlled the bout completely, dominating Peter and giving the brave Nigerian a terrible pounding before finishing him off with a huge right in the tenth.

The Klitschko brothers are renowned for approaching boxing on a scientific level, exploring every angle in their preparation for a fight and leaving nothing to chance. Their level of physical conditioning is incredible, and they always enter the ring in rock-hard shape with body fat levels most welterweights would be proud of. Despite their great height and huge frames, neither man has weighed more than 252 lbs for a fight.

If Derek Chisora were to beat Klitschko on Saturday night, it would rank as one of the greatest upsets in heavyweight history, right up there with Mike Tyson v Buster Douglas and Max Baer v Jimmy Braddock.
For an upset of such cataclysmic proportions to happen, there must be two essential ingredients; a complacent, under-prepared champion, and an inspired, talented challenger. We know from past experience that a complacent, under-prepared Wladimir Klitschko is about as likely as a humble Floyd Mayweather, i.e, it’s never gonna happen!

Will Chisora be inspired? He definitely seems to have the personality for the big occasion, but inspiration can be dissipated early in a Klitschko fight – around about the same time as that javelin like jab starts spearing through your defence, and that scything left hook – the punch that almost decapitated 6′ 7” top contender Ray Austin in two rounds in 2007, starts battering your head, and last but not least, that perfect heat-seeking-missile of a straight right hand, the best straight right seen since the days of the great Teofilo Stevenson – lands on your chin.
If that seems like an overindulgence of adjectives, maybe it is, but Klitschko is without doubt a modern heavyweight great, and deserves such superlatives.

So who is Derek Chisora, and just how talented is he?

Born in Zimbabwe 26 years ago, Derek Chisora (14-0, 9 ko’s) first grabbed the public’s attention when he won the 2006 ABA super heavyweight title. He turned pro the following year, and in just his fifth fight stopped fellow unbeaten prospect and future Commonwealth champion Sam Sexton in six rounds.
Cocky, confident and undoubtedly talented, Chisora was soon spoken of as the best of a crop of talented British heavyweights that included names like Sexton, Tyson Fury, Larry Olumbamiwo, Tom Dallas and David Price.

In May 2009 Chisora made the headlines for the wrong reasons when he was given a fine and a four month suspension by the British Boxing Board of Control for biting opponent Paul Butlin in the fourth round of their rematch, won by Chisora on points.

Chisora won the British heavyweight title in May 2010, stopping former world title challenger and one time Mike Tyson conqueror Danny Williams in two rounds on the Kevin Mitchell v Michael Katsidis undercard at West Ham’s Upton Park. The win over the man who had been Britain’s top heavyweight for a decade looks impressive on paper, but in truth Williams was only really in the ring that night for one last paycheck.

In his last fight in September Chisora clashed with old rival Sam Sexton once again, with Chisora’s British and Sexton’s Commonwealth belts up for grabs. Many experts figured that Sexton had made the greater progress in the two years since their first encounter, the proof being his two victories over previously unbeaten Belfast brawler Martin Rogan.

The fight was an outstanding domestic heavyweight encounter between two talented boxer punchers, a see-saw battle that saw Sexton take control in the early rounds and hurt Chisora, before ‘Del Boy’ came right back into the fight. By the ninth round there was nothing in it. Both men were exhausted, but it was Chisora who found the strength to rally with a barrage of unanswered punches that forced the referee to stop the contest.

The win over Sexton earned Chisora the no.10 spot in the WBO’s world rankings. When top contender Alexander Povetkin mysteriously pulled out of his proposed title fight with Klitschko, ‘Del Boy’ got the call, and grabbed the opportunity with both hands.

At a shade over 6′ 1”, and a bulky 245 lbs, Chisora is built more like a slugger than a boxer, but he stands upright, left hand low, similar to American James Toney. Whether he will be able to slip punches the way Toney famously does remains to be seen. Chisora has good hand speed but his stamina is questionable. Against Sexton, he looked exhausted in the ninth before digging deep and forcing the stoppage. Worryingly, the longer the bout went the lower Chisora’s guard seemed to go.

Chisora occasionally wastes hooks by slapping, but when he throws them with intent to the head or body they look fast and powerful. The question is can he get close enough to Klitschko to land them. He doesn’t posses David Haye’s one-punch knockout power (it took 32 unanswered head-shots before referee John Keane jumped in, and even then Sexton was still standing), so his only hope would seem to be to wear Klitschko down and stop him.

Heavyweight boxing will always be a risky business, because by definition it is two huge, highly trained guys throwing punches at each other. However, looking at all factors logically, the only positives Chisora can hope to take from Saturdays fight are a nice paycheck and the experience of going a few rounds with the worlds best heavyweight since the peak years of Lennox Lewis.

Klitschko by KO in eight.