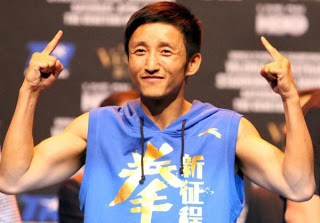 Who are the
biggest stars in world boxing today? Mayweather? Alvarez? Pacquiao?

Floyd Mayweather is certainly king when it
comes to US pay-per-view. Saul “Canelo” Alvarez fills football stadiums. Manny
Pacquiao used to do both, and maybe still does. There is however another fighter
on the horizon who might soon dwarf all of the achievements of the
aforementioned trio of Mayweather, Alvarez and Pacquiao.

You may not
yet have heard of Chinese double Olympic gold medalist and triple world amateur
champion Zou Shiming, but you will. In April this year Shiming became a
professional fighter under Bob Arum’s Top Rank promotional banner. Shiming’s
debut, a four round points win over Mexico´s Eleazear Valenzuela topped a bill at
the fabulous Venetian Resort in Macau that featured two world title fights on
the undercard. His fight was watched by 300 million people in China, and
Shiming was paid $300,000, by far the largest sum ever paid to a debuting
fighter. HBO even ferried their entire ringside team over for the event – George Foreman, Larry Merchant et al. And the MC was, you guessed it, Michael Buffer. 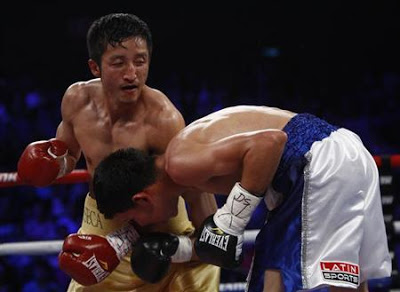 For those
not overfamiliar with Macau (also spelled Macao), it is one of two special
administrative regions in China, the other being Hong Kong. Macau was a
Portuguese colony from 1557 until 1999. Its half-million population enjoy a GDP
wealth that is just short of Monaco’s. Why? Because Macau is literally the
gambling capital of the world. And if you are thinking that surely Las Vegas
holds that title, Sin City lost that some might say dubious honor back in 2007.
In fact Macau´s casinos are on course to net three times the revenue of Las
Vegas by 2015.
This huge
surge in revenue has prompted savvy boxing promoters like Bob Arum to cash in
on what clearly is an exciting and super lucrative new market. Indeed one of
the biggest fights of 2013 is set to be Manny Pacquiao´s comeback bout against
Brandon Rios in November – and it will be promoted by Arum at the Venetian
Resort in Macau.
Shiming is
no spring chicken at 32, especially as a flyweight. His trainer, Freddie Roach
is looking to fast-track his charge to be in a position to challenge for a
world title within the next year to 18 months. This approach worked well for
Cuban featherweight star Guillermo Rigondeaux, who like Shiming was a
phenomenal amateur and double Olympic gold medalist. Rigondeaux won the interim
WBA featherweight title just 18 months and seven fights after turning pro. 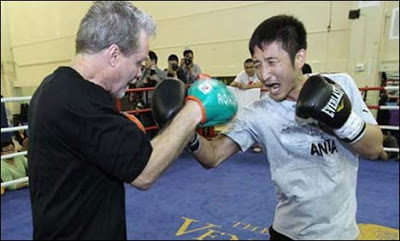 Shiming is
fairly tall for a flyweight at a shade under 5´6´´. As a boxer he certainly
looks to be the real deal. He carries his hands low, and relies on speed and
timing for both offence and defense. Freddie Roach has encouraged Shiming to
continue to do the things that led to his great amateur success, while fine
tuning his style to suit the pro game and also adding extra power to his
punches. His idols include Muhammad Ali and Manny Pacquiao, who he calls the King of Asian boxing.
Zou Shiming
blazed a trail for Chinese boxers by winning his country´s first ever Olympic
medal for the sport – a bronze – in the 2004 Athens Olympics. He then struck
gold in the light-flyweight class at both Beijing in 2008 and London in 2012. Who
would bet against him achieving similar success in the pro ranks? And with 1.3
billion Chinese supporting him, if he does, will there be a bigger draw in
boxing?