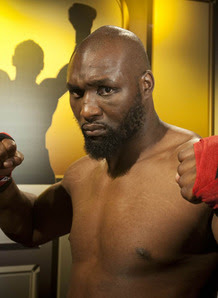 Win lose or draw, ‘Big Danny’, all 6’3” and 19 stone of him, a stalwart of British heavyweight boxing for the last decade, intends to quit the ring and become a bodyguard to the rich and famous.
At a press conference earlier this week Williams said;
“That’s it for Danny Williams in the boxing world. You won’t hear the ring announcer calling the name Danny Williams again. After the fight, I’m going to do a course to become a qualified bodyguard. When the big stars come over, Madonna and all of them, they can be protected by the man that beat Mike Tyson!”

Williams failed in his attempt to win the world title when he was knocked out in eight rounds by WBC champion Vitali Klitschko in December 2004, but insists he has no regrets;

“I wanted to become a world champion but that wasn’t God’s will. But I’m happy with what I’ve achieved. I am two-time Commonwealth champion, a two-time British champion, I beat Mike Tyson and fought for a world title. I have more British and Commonwealth title defences than Henry Cooper, so I’ve done alright.”

The list of victims on Williams record reads like a ”who´s who” of British heavyweight boxing of the last fifteen years, with wins over the likes of Audley Harrison, Matt Skelton, John McDermott, Michael Sprott, Julius Francis and Scott Gammer. Way back in October 2000 Williams showed unbelievable bravery to win his first British title, fighting on despite dislocating his right shoulder, and with the damaged limb hanging limply by his side, knocking out Mark Potter with a left hook in the 6th.

In 2001, Williams took on an unbeaten Australian named Kali Meehan and knocked him out in 32 seconds – the same Kali Meehan who is currently ranked the no.1 contender for WBA heavyweight champion David Haye´s crown.

The pinnacle of Williams career came on that unforgettable night in Kentucky in July 2004 when he waged war with Mike Tyson for four savage rounds, absorbing blockbuster bombs from ”Iron Mike” early on, but surging back to KO the American legend in the fourth.

Recently, 36 year old Williams seems to have lost his way. He is 2-2 in his last four fights – two very close wins over Essex hard man John McDermott in British title fights were spliced with a November 2008 knockout loss to future European champion Albert Sosnowski, and an embarrassing two knockdown – three round points loss to novice Carl Backer in the first round of last October´s Prizefighter: The Heavyweights.

Despite the Baker fiasco, Williams still believe he will have too much for challenger Derek Chisora on Saturday night. The bookies don´t agree; Williams will go into the fight a 5/2 underdog, with Chisora a solid 2/7 favorite (bet365).

Born in Zimbabwe 26 years ago, Chisora showed his promise when he won the ABA super heavyweight title in 2005. As a pro Chisora´s main claim to fame is his 2008 sixth round TKO win over future Commonwealth champion Sam Sexton. Chisora (12-0, 7 ko´s) also gained a measure of notoriety when he was suspended for four months after biting Paul Butlin during their fight last May. Chisora was also fined £2,500. Last time out, Chisora knocked out Williams´s Prizefighter conqueror Carl Baker in two rounds.

On the prospect of fighting Chisora, Williams said;

“Chisora’s style is to come forward, be aggressive and pound his opponents with big shots. That’s the type of fight I like, people who get forward and try to battle with me. So, I predict a good fight on the night,” said Williams.”I haven’t got a clue how exactly the fight will go, but I do believe I will be successful.”

Williams was originally scheduled to meet Commonwealth champion Sam Sexton, but Sexton was forced to withdraw due to personal matters. On the change of opponent Williams said;

“It’s a better fight for the public because Chisora is an aggressive fighter and I’m going to put it on him,” said Williams. “Chisora may have a win over Sexton, but since that fight Sam is the one who has made progress. I want to go out in style, and I still plan to fight like Rocky Marciano in there. I’m proud that I have been in entertaining fights over the years, and I don’t plan on changing things now.”

”Win or lose this is the last time you’ll see Danny Williams in a ring.”

British heavyweight boxing wont be quite the same after Big Danny hangs up his gloves, and it would be great to see him go out in a blaze of glory. But Williams punch resistance, so good against Tyson back in 2004, seems to have deserted him. He still has a punchers chance, but unfortunately for Williams, Chisora looks sound defensively.

Chisora by TKO in six.