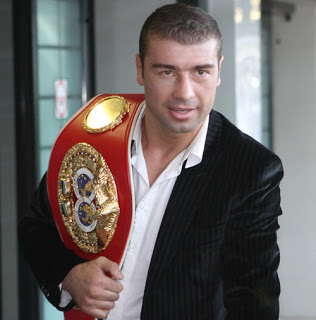 He may not be competing in the Showtime Super Six World Boxing Classic, but many would argue that IBF champion Lucian Bute is in fact the best super-middleweight on the planet.
This Saturday fight fans get a chance to see Bute in action when he makes the fifth defense of his title by taking on the dangerous Colombian puncher Edison Miranda at the Bell Center in Montreal, Quebec, Canada.

30 year old Bute (25-0, 20 ko´s) a Romanian now based in Quebec, looked awesome last time out when he iced Mexican iron man Librado Andrade in four rounds last November. This was the same Andrade who, when the pair first met in October 2008, knocked Bute down late in the twelfth and missed his opportunity for a knockout victory on account of a long count by the referee.

In the rematch, southpaw Bute looked to be committing ring suicide by taking the fight right to the rugged Mexican – who obliged by giving Bute a pasting for the first three rounds. In the fourth, with Andrade dominating the fight, Bute came up with two tremendous lefts, the first flooring the Mexican briefly and the second, a scything body shot, sending Andrade sinking to his knees, paralyzed in pain, a la Oscar De La Hoya vs Bernard Hopkins.

The Andrade rematch illustrated Bute´s sheer toughness and punching power – ring traits that have made him a huge star in his adopted Quebec.

Since turning pro in November 2003 with a solid amateur pedigree behind him, Bute has boxed exclusively in North America, the majority of his fights taking place in Canada. At 6´2´´ tall, Bute is one of the new breed of giant super-middleweights that includes Andrade, Carl Froch, Andre Ward, Andre Dirrell, Allan Green and Mikkel Kessler, men who are over six feet tall, yet still big and powerful at 168 lbs.

Bute made rapid progress through the pro ranks, and in June 2007, with a record of 19 straight wins, he met tough Australian based Cameroonian Sakio Bika in an IBF title eliminator, winning a one-sided unanimous decision.
Four months later, Bute challenged vicious punching Colombian Alejandro Berrio for the IBF super-middleweight title. Berrio with 25 knockouts in his 26 wins, was coming off a three round blitzkrieg over talented German Robert Stieglitz to win the title, and most experts figured he was just too dangerous for the Romanian. But on the night, it was Bute, the master technician, who dominated the fight, TKO´ing the Colombian in the 11th round with a salvo of powerful lefts.

Since winning the title, Bute has successfully defended it four times, knocking out 37 year old former WBA middleweight champion William Joppy in 10, stopping Colombian Fulgencio Zuniga in 4, as well as the two wins over Andrade. His title reign has been dominant; until he was floored late in the twelfth, Bute was winning his first fight with Andrade comfortably. The second fight between the two´s conclusion was decisive.

Miranda (33-4, 29 ko´s) first announced himself on the world stage when he became the only man to stop Britain´s Howard Eastman, in an IBF middleweight title eliminator in March 2006.
The Englishman, an outstanding middleweight who at that time had only lost on points to the likes of William Joppy, Bernard Hopkins and Arthur Abraham, was the pre-fight favorite. But come the opening bell, fight fans witnessed the powerfully built Colombian slugger overwhelm Eastman, stopping him in seven rounds. Overnight, Miranda looked to be possibly the most dangerous 160 pounder on the planet.

Six months after the Eastman victory, Miranda challenged another powerhouse of a fighter, German based Armenian Arthur Abraham for his IBF crown. The result was a bloody, peer-six-brawl of a fight that saw Miranda break Abraham´s jaw in two places. Miranda displayed the worst side of his character during the fight, being deducted a total of five points for low blows, and clearly headbutting Abraham against his broken jaw in the 5th round.
Abraham won rave reviews for finishing the fight despite his injuries and winning the decision. Miranda´s reputation as an awesomely powerful puncher, but a loose cannon with limited ring technique was established with this fight.

Since that fight, Miranda´s career has followed a familiar pattern; he is way too good for the majority of middleweights and super middleweights out there, but he comes up short when he goes up against the very top guys.

In May 2007 Miranda was knocked out in seven rounds by current middleweight king Kelly Pavlik in a WBC title eliminator. In a 2008 rematch with Abraham, he was blown away in just four rounds. And last May, Miranda was dominated by Andre Ward over twelve rounds.
In between those setbacks, Miranda has had his successes. In March 2007 Miranda became the only man to beat Allan Green, who faces Andre Ward in the Super Six World Boxing Classic this weekend. Last time out, Miranda flattened highly ranked Mexican Francisco Sierra in one round.

One can only wonder how good Miranda would have been if he had received better coaching during his career. Had he chose to base himself in Germany, and come under the tutelage of the great German trainer Ulli Wegner for example, who has done such a stellar job with Arthur Abraham, Miranda would surely have become a world champion.

Now Miranda has what may be his last opportunity to win a world crown against Lucian Bute. This writer believes the Colombian´s lack of good ring technique, his slack defense, and his hot-headedness will all cost him dearly on Saturday. Huge punch aside, if ever a fighter was tailor-made for Bute, it´s Miranda.

There is always the chance the Colombian could land a hayemaker, but in reality, Bute will be picking him off right from the get-go. I can see this fight being one-way-traffic, interspersed with the occasional Miranda attack, but after four rounds, the Romanian will be looking to end it.

Bute by a 5th round TKO.