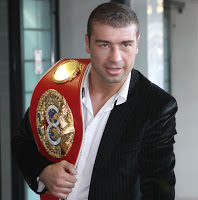 Unbeaten Lucian Bute of Montreal will defend his IBF super-middleweight title for the fifth time against hard-hitting Edison Miranda.

InterBox announced last week the 12-round bout will take place April 17 at the Bell Centre.

It promises to be a clash of styles as the slick southpaw Bute (25-0, 20 knockouts) faces a dangerous knockout puncher in Miranda (33-4-0, 29 KOs), a Colombian known as Pantera.
The 29-year-old Miranda’s only losses have been to quality opponents, including a controversial 2006 defeat by unanimous decision to Arthur Abraham in which the German suffered a suspected broken jaw in the fourth round but was allowed to continue fighting. read more