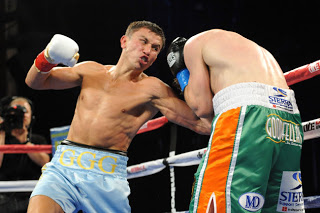 Any doubts that Gennady Golovkin was the certifiable ´Terminator` of the middleweight division were dispelled as soon as the count was tolled over the prostate form of Matthew Macklin, writhing on the canvas courtesy of a brutal, scything body shot in the third round.

WBA champ Golovkin started fast at the Foxwoods Resort and Casino, Connecticut on Saturday night, catching Macklin several times in the first round with clubbing shots and opening a cut. The second round was more of the same, as the deceptively slightly built Golovkin, born in Kazakhstan but now based in Germany, stalked Macklin relentlessly.

Ironically, 31 year old Macklin (now 29-5, 20 KOs) had his best moments at the start of the third round, when he scored with a quick right-left combination that briefly stopped Golovkin´s relentless tank-like rumble. It was too-little, too late however, and moments later Golovkin (now 27-0, 24 KOs), also 31, tagged Macklin with a right uppercut followed by a vicious left hook to Macklin’s ribcage that ended the bout. The blow dropped the Irishman to the canvas, where he rolled around in agony and was counted out at 1:22 of the round.
Macklin´s promoter Lod DiBella, who also handles WBC middleweight champ Sergio Martinez would later comment: “That was one of the hardest body shots I’ve ever heard. The last time I saw a body shot like that was when Roy Jones landed a shot against Virgil Hill. I heard something crack.”
Golovkin has now made eight successful title defences of the WBA 160 lb crown he won in 2010, and his current KO streak is now 14 fights stretching back to 2008.

A jubilant Golovkin said in the ring afterwards: “I told you this is just a regular fight, not the biggest challenge,” said Golovkin afterward. “This is just a regular fight because I’m champion today….I want this fight (vs. Sergio Martinez). I felt great in the ring, he never hurt me. It was an easy fight for me. I want to fight against soon. Any top fighter, any champion, any belt holder….anywhere.”

The game but out-gunned Macklin commented: “He’s the best I ever fought. He never really let me get started. It was a great shot he landed, the left hook to the body is personally one of my favourites. I tip my hat to him; he’s a great champion. He has clubbing, solid power and you can feel the weight of every punch he throws. He´s the best I´ve ever fought by far. Sergio (Martinez) is a friend of mine, but he (Golovkin) is better.”

Birmingham born Irishman Macklin has now lost three of his last four fights, but his opposition has been top-flight. He lost a split decision to Felix Sturm in June 2011 for the WBA super middleweight crown in a fight most thought he´d won, and was beaten in March 2012 by Sergio Martinez for the WBC belt on an 11th round retirement. He was simply outclassed on Saturday, but fortunately for Macklin – and the other contenders in the division – there aren’t too many middleweights out there as good as Golovkin. He (Macklin) will surely be back, and may even challenge for another title.

There was some talk after the bout of a fight between Golovkin and Sergio Martinez, the man most still regard as the real world middleweight champion. However the Argentinian is recovering from knee and hand injuries he sustained in his last fight against another Brit, Martin Murray, and isn’t expected to box again until 2014, by which time he will be 39.