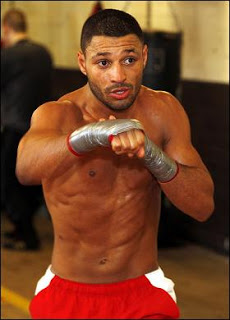 Sheffield’s British welterweight champion Kell Brook returned to the ring after an eight month layoff to dispose of Poland´s Krzysztof Bienias in six one sided rounds in a WBO world title eliminator on the Smith v Dodson undercard at Liverpool´s Echo Arena last night.
Brook´s promoter Frank Warren controversially declared after the fight that Brook should now fight Amir Khan.
Going into the fight, 30 year old Bienias (39-4, 16 ko´s) was ranked two places above 23 year old Brook (21-0, 14 ko´s) in the WBO rankings at 4th. The Pole was undefeated for over five years, and hadn’t lost a fight since suffering a two round stoppage to Junior Witter on a cut eye in a European junior-welterweight title challenge in November 2004.

But from the opening bell, the gulf in class between Brook and Bienias was as wide as the Grand Canyon. The 5´9´´ Brook is as powerfully built a welterweight as you are ever likely to see, and Bienias, only half an inch taller, looked frail in comparison. Brook was the pursuer and Bienias the pursued, as the Sheffield fighter, a protege of Brendan Ingle, patiently stalked his defensive minded opponent around the ring. Bienias barely threw a left jab in the entire first round, preferring to dance away from the heavy handed Brook, hands held high in a tight defensive guard.
The fight continued in this manner in the following rounds, with Bienias retreating and Brook attacking. Brook displayed his full arsenal of punches, although Bienias blocked the majority of them. When Brook did get through, the Pole showed a remarkably sturdy chin.

In the sixth round, Bienias chose to come out of his defensive shell and caught Brook by surprise with a couple of stiff right´s. Brook decided to step up his attack, and a vicious uppercut followed by a barrage of heavy punches saw referee Victor Loughlin jump in – maybe a touch prematurely – although neither Bienias nor his corner complained about the stoppage.

After the fight, Brook was happy with the win, and pleased it had gone as far as it had;

”I was out for eight month´s, initially with a viral infection, so I was glad to get six rounds under my belt. It was a blessing in disguise. Now I´m heading forward. He (Bienias) was my first orthodox opponent in a while. I´m very happy with the victory. Fights like that against good European fighters will bring me on leaps and bounds.”

”I see Amir Khan held a press conference and they were talking about fighting Manny Pacquiao in 18 months, and that´s something down the road that hopefully we´ll be looking at for Kell, but in the meantime, what a good fight Amir against Kell would be; a really good quality fight – now. Kell´s ready for Amir and I´m sure Amir´s ready for Kell. That would be a great fight for the British fans.”
As Khan is the current WBA light-welterweight champion with a defense lined up against Paulie Malignaggi at Madison Square Garden on May 15th, and Brook is a fully fledged welterweight with no intention of starving himself down to 140 lbs, Warren´s comments can only be viewed as a sideswipe at Khan, a fighter Warren had promoted since turning pro, but who left him in favor of Oscar De La Hoya´s Golden Boy Promotions earlier this year.

Khan, a stablemate and sparring partner of Filipino superstar Manny Pacquiao, who defends his WBO welterweight title against Joshua Clottey in Las Vegas tonight, will inevitably move up to welterweight, so a Khan v Brook fight could happen in a year or two.

Maybe Frank Warren will have the last laugh after all.