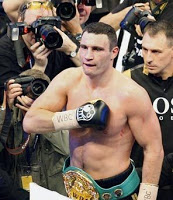 David Haye´s trainer Adam Booth believes he has spotted a weakness in Vitali Klitschko´s battle plan, and his charge, WBA heavyweight champion David Haye is just the man to exploit it Haye and Boothe watched Klitschko retain his WBC heavyweight crown in Bern, Switzerland on Saturday night against the previously undefeated American Kevin Johnson.
It was Klitschko´s fourth defense in two spells as WBC champion. It was also his fourth fight in just 14 months since returning to the ring after an enforced four year lay off.
Klitschko was at his relentless best, as he won 35 rounds out of 36 on the three judges combined scorecards. Johnson had claimed that he was going to shock the world, but within seconds of the first bell, the American retreated into survival mode. To his credit, Johnson was never hurt, and managed to negate a lot of the giant Ukrainians punches. Klitschko kept up his usual non stop attack to the head, rarely if ever going to the body. Klitschko throws punches with little more than arm strength, rarely putting his full body weight into his shots, and yet he is so heavy handed and throws so many punches that his opponents can do little more than defend. On the rare occasion an opponent tries to make a fight of it, a la Chris Arreola earlier this year, they suffer a terrible pummeling.
After the fight, Klitschko talked about either himself or his brother Vladimir, the current IBF and WBO champion meeting David Haye in 2010.
“This will be very interesting to fight Haye but let’s see what next year brings. Right now Haye will be fighting John Ruiz. I wish him luck and let’s see. The Klitschko´s have all of the belts except the WBA. We want to have them all!”
Adam Booth said of the Klitschko v Johnson fight:
“It was a typical Klitschko performance and a typical Vitali performance. He does the same thing over and over again and everybody that he fights is unable to pose a question of his style. He plants his feet in range, uses his height to lean back out of the way of hitting coming back that may have substance on it and uses his strong arms to push so repetitively. He probably has the strongest arms of any heavyweight. He does the same thing every second of every round of every fight and it amazes me that these so-called elite heavyweights cannot figure out that there is a simple answer to that style – to be able to land your punches.”