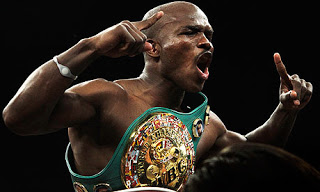 Timothy Bradley added the WBC light-welterweight crown to his WBO belt when his unification fight with Devon Alexander was decided on a technical decision following an accidental clash of heads in the tenth round in Detroit’s cavernous Silverdome Arena on Saturday night.

The incident left Alexander unable to see clearly. Referee Frank Garza ruled the head clash accidental before sending Alexander to his corner. Ringside physician Peter Samet checked the extent of the 23-year-old’s injury, and promptly called a halt to proceedings after ruling that Alexander could not keep his eye open. Samet said: “Alexander could not open his eye, it was more than a cut. I was worried it was more than a nerve, that his eye was paralyzed. That’s why I stopped the fight.”

Alexander’s injury and the referee’s subsequent decision brought an unsatisfactory finish to this much-anticipated unification matchup, the first big fight of 2011. It had been a scrappy contest and heads had clashed as early as the third, resulting in a cut eye for Alexander. The St Louis fighter tried to control the fight with his jab, but had found Bradley difficult to contain, as the Californian did what he always does, bustle forward with his distinct blend of boxing and slugging.

The 5′ 6” Bradley lacks genuine knockout power, and hasn’t stopped an opponent since April 2007. That’s now nine consecutive fights that ”Desert Storm” has failed to detonate in. On the plus side, he is extremely tough, and has tremendous mental strength. He’s not the biggest light welter, not the best boxer nor the hardest puncher, but he has a bit of everything, and a ton of self belief. If he hit a little harder, he would be not dissimilar to another famous light welterweight – Julio Cesar Chavez.

The sudden, unexpected ending to the fight left the near 7000 crowd in the vast Silverdome stadium stunned and disappointed. Bradley, now unbeaten in 27 in professional fights (11 ko’s), and his corner may have been the only people satisfied with the outcome, and he now feels he has proved himself to be the best in the world at 140 lbs, but wants victory over the WBA champion Amir Khan to solidify his reputation.

“I think I proved that I’m a force to be reckoned with,” said the 27-year-old. “I proved I’m the best at 140lb in the world. I think I’ve got to take out Amir Khan next and then there’s no doubt that I’m the best 140lb fighter in the world.”

Khan has lined up an April 16th date at the M.E.N in Manchester for his next fight but has yet to determine an opponent after negotiations with Northern Ireland’s European champion Paul McCloskey fell through this week.

Khan worked as part of the Sky Sports team covering the Bradley-Alexander bout, and said a showdown with the Californian was a distinct possibility for this summer. “Get the April fight out of the way then in the summer we can fight with Bradley.” said Khan. ”He did say he’ll come to England so what a great fight that would be for the British fans.”

Interestingly, and worryingly for Khan and his trainer Freddie Roach, Bradley’s last six opponents have all suffered eye injuries. Regarding the fight ending head clash Khan said: “Bradley does tend to lunge in with his head, so when I fight him I’ll be watching his head. I’m wary of that. When I fight him I’ll have to be smart, hit him from angles, and keep the jab going. I have a lot of respect for him. He’s a great champion. But I’ll be watching his head”

Bradley himself defended his fighting style, saying ”He was coming in at the same time I was coming in and these things happen. I’m in the ring to win. I’m ruthless, I’m reckless. It’s a street fight. He didn’t want to get hit with the big shot, both of us were going in. If that’s the best in the world, that’s weak. I did not want the fight to end that way — I really wanted to finish the fight.”

After the fight a dejected Alexander, who saw his record fall to 21-1 with 13 ko’s said: “If the doctor said I could go on, I would have gone on. People are going to criticize you whatever you do. It’s my health, not their health. When it comes to your health, after the fight you still have your health. The doctor knows best. I don’t know anything about (what it would take for) my eye (to be) paralyzed.”

* Amir Khan has sacked his strength and conditioning coach, Alex Ariza, with whom he had been working since joining Freddie Roach’s Wild Card Gym in 2009. “There were a few things in training camp that I wasn’t happy about and Freddie wasn’t happy about,” Khan said.