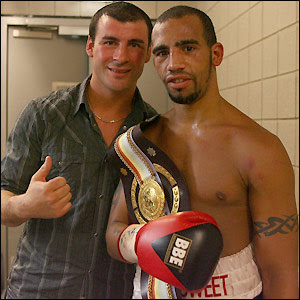 This Friday night, the York Hall in Bethnal Green plays host to the latest installment of Sky TV´s hugely popular Prizefighter competition.
Eight boxers, this time from the light-middleweight division, compete in a quarter final lineup, all bouts fought over the three round distance. The quarterfinals, semi-finals and final are all completed on the same evening. First prize is £32,000.

10/3 (skybet). Pryce (28-7, 17 ko´s), a pro since 1999, won the Commonwealth light-middleweight title in March 2006 with a decision over Ghanaian Ossie Duran. He defended his crown six times in the next two years, including excellent stoppage wins over Anthony Small (TKO 7), Martin Conception (TKO 3) and Marcus Portman (TKO 6). His reign came to an abrupt end in March of last year, when he was demolished in two rounds by Manchester’s Mathew Hall, hitting the deck three times in the second round. Ironically, Hall went on to lose his next fight against former Pryce victim Small.

Pryce has proved he can punch, but can also be caught, and has suffered four knockout losses in his career. He meets Neil Sinclair in the quarterfinals.

22 year old Manchester middleweight Prince Arron (14-3, 1 ko), drops down a division to take part in Fridays competition. At 6´3´´ tall, Arron towers over the other seven fighters in the lineup. Arron is yet to fight for a major domestic title, and his most high profile opponent was the current darling of New York, Irish John Duddy, who knocked out Arron in two rounds in October 2007. Arron is unbeaten since then, and with his height and reach advantages, plus his sound boxing skills, he is the bookies joint second favorite at 4/1 (skybet).

His quarterfinal opponent is George Hillyard.

Belfast´s 35 year old veteran Neil Sinclair (33-7, 26 ko´s) is the oldest and most experienced fighter in the lineup. A former British welterweight champion, Sinclair challenged Puerto Rican puncher Daniel Santos for the WBO welterweight title way back in 2000, losing in two rounds. He bounced back the following year to win the British title stopping Harry Dhami in five rounds. He made two successful defenses, including an eighth round TKO over tournament favorite Bradly Pryce in 2003. At 4/1, he is joint second favorite to win the competition.

His quarterfinal rematch with Bradley Pryce could be the competition´s standout fight.

Bristol´s 22 year old Danny Butler (18-3, 3 ko´s) is taking part in his second Prizefighter tournament. Butler was as semi-finalist in the middleweight competition in 2008, losing to the eventual winner Martin Murray. In his last fight he was stopped in seven rounds by undefeated Darren Baker in an unsuccessful attempt to win the Commonwealth middleweight title.

He is 5/1 (skybet) to win the competition, and meets Brett Flourney in his quarterfinal fight.

26 year old Steve O’Meara (10-0, 2 ko´s) from Middlesex is one of two undefeated fighters in the competition. An interesting character, he was briefly based in Philadelphia, USA, and had former heavyweight champion ´Terrible` Tim Witherspoon is his corner for his American debut. While in the States, he sparred with Floyd Mayweather Jr no less, and has been training with Olympic champion James DeGale in preparation for Prizefighter.

He is joint 5/1 to win the tournament, and meets Martin Conception in his quarterfinal bout.

28 year old Leicester puncher Martin Concepcion (16-6, 10 ko´s) goes into Prizefighter showing his best form in five years. His three victories in just four months having given him a winning mentality, something he had lost when he went 2-6 between 2005 and 2007.

A kill-or-be-killed type of fighter, 9 of Conception´s 10 knockout wins have come inside two rounds, including a first round icing of an undefeated Mathew Small, future conqueror of tournament favorite Bradley Pryce. Conception has been knocked out four times, including a third round TKO at hands of Bradley Pryce in a 2007 Commonwealth light-middleweight title challenge.

Conception is 15/2 (skybet)to win the tournament, and his quarterfinal encounter with Steve O´Meara should be a thriller.

Birkenhead´s 30 year old Brett Flournoy (9-0, 4 ko´s) is the second undefeated fighter in the tournament. Flourney hasn’t fought since since his last fight against Glasgow´s hugely experienced former British welterweight champion Kevin McIntyre was declared no-contest in the second round when medics were called to the assistance of stricken fighter Jason Rushton.

He is 11/1 (skybet) to win the tournament, and his quarter-final opponent is Danny Butler.

Canning Town´s 25 year old George Hillyard (9-4-1, 5 ko´s) is the 25/1 outsider to win Prizefighter. Hillyard can punch, and stopped talented Danny Goode in June 2008, his last victory. In his last fight he was pulled out after four rounds against British title contender Mathew Thirwall.