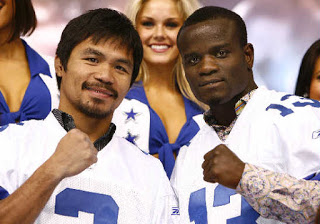 One of the obviously good things about the internet is access. It allows us to trade views of varying wisdom right across the world in an instant. One of the bad things about the internet is that some of those views could fuel a hot-air balloon forever and a day.
Take a contribution at the weekend on the Bleacher Report, a shouty site for mainly American tastes in sport. “Could it be,” asks Bryan Flynn, “that before we are even halfway through 2010 the sport of boxing could be in its death throes?”
Nothing personal, Bryan, but this is Yankocentric nonsense. The author thinks the sport is doomed: a) if Joshua Clottey beats Manny Pacquiao; b) if Shane Mosley beats Floyd Mayweather Jr; c) if Mayweather Jr beats Mosley and has nobody else to fight; and d) if Pacquiao wins and retires.
There is, it seems, nobody else “out there” capable of saving the sport. “Out there”, in this case, is defined by the shores of the United States. We will have to see if David Haye can persuade Mr Flynn and like-minded experts to think otherwise by doing a number on John Ruiz in faraway Manchester next month. read more