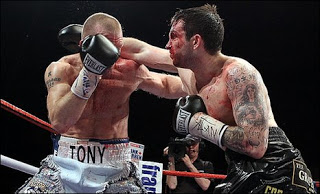 Scoucers Paul Smith and Tony Dodson brawled and mauled their way through twelve rounds in front of 8000 fans at Liverpool´s Echo Arena last night. When the blood and dust had settled, defending champion Smith had retained his British super-middleweight title by a unanimous decision.
Bad blood had boiled between the two in the build up to the fight. 29 year old former champion Dodson (24-6, 12 ko´s) branded Smith, who DJ´s part time, the ”Peter Andre” of boxing. Smith retaliated by stating that Dodson was a ”jellyman” with a glass jaw who would collapse the first time Smith hit him.

27 year old Smith (29-1, 15 ko´s) appeared to be in a barely controlled rage on his walk to the ring, and at the bell, tore into Dodson recklessly. For his part, Dodson stayed cool and boxed behind his jab. Smith continued to lunge in to the attack, and it was one of these lunges that resulted in the clash of heads that ripped open an awful gash above his left eye. Another clash of heads in the second round saw a second cut, high on Smith´s forehead. Both cuts bled profusely, and Smith´s face soon resembled Mel Gibson in full warpaint in the movie Braveheart.

The pattern of the fight continued with Smith lunging in, and Dodson grabbing him and smothering his attacks. Referee Phil Edwards began warning Dodson as early as the second round for his holding, but didn’t deduct a point from him until the tenth. Had he deducted a point earlier, Dodson would have been forced to fight more and hold less or face disqualification.

It was also surprising that referee Edwards allowed Smith to continue with such vicious cuts. The cut above Smith´s eye alone should have caused a termination in the proceedings. Luckily for Smith, the referee allowed him to fight on; British boxing still awards a fight stopped on a cut to the cut victims opponent, whereas most countries go to the scorecards for a technical decision.

But allow it he did, and the resulting fight was an ugly maul. During the first half of the contest Dodson looked in control, but Smith gradually began to dominate and by the second half he was in control. When Smith kept Dodson at a distance, his punches looked impressive, but time and again he chose to close the gap, allowing Dodson to grab him, and any momentum Smith would gain would be lost. Only in the twelfth and final round did both men tee-off on each other, providing an exciting climax to what had been a frustrating night for both Smith and the fans.

The ringside judges scored the bout 116-111, 115-112 and 117-112 all for Smith, who could now be out for six months. The layoff should do him good, because he looked a league below world class, and if he has ambitions of fighting the likes of Carl Froch for his WBC super-middleweight title, he will have to perform 100% better next time out.

As for Dodson, he looked remarkably fresh and sharp after a year out of the game. Had he held less and concentrated more on punching with authority he would be waking up with the British title this morning.