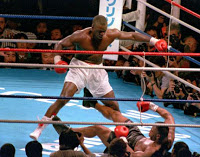 This weekend sees the 20th anniversary of the biggest upset in the history of boxing, 42-1 underdog James ´´Buster“ Douglas´ sensational 10th round knockout over an undefeated, invincible, ´´Iron“ Mike Tyson on February 11th 1990.

It’s 20 years ago this week that James “Buster” Douglas knocked out Mike Tyson in one of the great upsets in modern sport and there still is a certain melancholy about Douglas that time has not repaired.

He still gives the impression of a man just awakened from a dream in which he is all he ever wanted to be, a man without regret, and his reaction to being thrust back into an imperfect and unforgiving reality is one that combines resignation and a stubborn despondence.

If you didn’t know better, you would think Douglas had used up his time like the uncountable many who lived their lives from beginning to end giving chase to the glory he achieved in Tokyo on Feb. 11, 1980.

The lives of most men are dreary and humdrum affairs, after all, and the lives of prizefighters, even the pretty good ones, are spent in service of approval and affirmation, which none can know at the time is a no-win endeavor.

Douglas became a fighter in the first place because of his father, Billy Douglas, a hardnosed 1970s middleweight whose stubbornness and pride was such that after James ran out of gas and quit against Tony Tucker in 1987, he walked away from his son’s career in revulsion.

The loss ratified the consensus among those who make a silly living writing about fistfights that Douglas was under-motivated and soft, even if he had been graced with a body and physical skills that made other heavyweights envious.read more