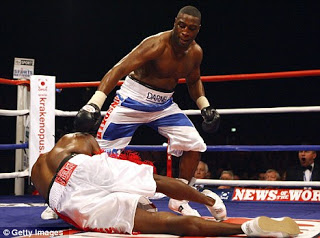 The British duo of Audley Harrison and Michael Sprott go head-to-head for the vacant European heavyweight title at London´s Alexandra Palace this Friday. The fight is a rematch – Sprott sensationally flattened Harrison in three rounds in a European title fight at the Wembley Arena in 2007.

38 year old Harrison (26-4, 19 ko´s) was originally scheduled to fight Albert Sosnowski for the European title, but the Essex based Pole vacated the crown he had won on points against Italian Paulo Vidoz last December when he was offered a shot at WBC heavyweight champion Vitali Klitschko, a fight that takes place on May 29th in Gelsenkirchen, Germany.

Despite only being ranked 9th by the E.B.U (European Boxing Union) Harrison was allowed to maintain his position as a title challenger, while his promoter Barry Hearn looked for a suitable replacement.
Although the E.B.U´s top three are Alexander Povetkin, Nikolay Valuev and Tomasz Adamek, and the official challenger is Alexander Dimitrenko, all world ranked fighters, none were prepared to make the April 9th date at the ”Ally Pally.”

The E.B.U´s no.8 contender Michael Sprott threw his name into the hat with a 58 second stoppage win over German journeyman Werner Kreiskott on the Vladimir Klitschko – Eddie Chambers undercard in Dusseldorf last month, and soon after, it was announced that Harrison would indeed meet Sprott for the vacant European heavyweight title.

London born, California based Harrison is still best known to UK fight fans as the super-heavyweight gold medalist at the 2000 Olympic games in Sydney.
Although already 29, Harrison turned pro with a million pound, ten fight contract courtesy of the BBC and all the hope and hype that would surround any 6´6´´, 250 pounder with an 86´´ reach who had just been crowned the best amateur boxer on the planet.
The general belief was that Harrison, as gifted as any British heavyweight prospect in history, could be a world champion within three years.

It soon became apparent that Audley´s defensive, safety-first ring style was not turning the fans on. He was frequently criticized by press and public alike for uninspired performances, and for making heavy weather of moderate opposition.

After racking up 19 straight wins, Harrison met Danny Williams for the vacant Commonwealth title in December 2005, and lost a split-decision in a dreadful fight.
Four months later, and Harrison again tasted defeat, this time at the hands of one-time American heavyweight prospect Dominic Guinn in a bout in California.

Almost a year to the day after his loss to Williams, Harrison was to avenge that defeat with what remains his best ever performance; a three round demolition job of Williams. To date this ranks as the only time in Harrison´s career so far that all of his talents have come together. He dominated Williams from start to finish, and suddenly fans dared to believe that Harrison just might be capable of going all the way and winning a world title.

Just two months later in February 2007, Harrison faced European champion Michael Sprott in a fight he was expected to win easily. The first two rounds were Harrison´s. Sprott survived a first round knockdown and by the third was looking surprisingly lively.
Late in the third, Sprott let loose with a Hail Mary of a left hook, and Harrison was out before he hit the canvass.
Such was the severity of the knockout, Harrison´s career seemed over, and when he dropped a decision to ten fight novice Marty Rogan in December 2008, there looked to be no way back for the 37 year old former Golden Boy.

Enter Barry Hearn and his Prizefighter competitions; eight fighters compete in a quarter final lineup, with the four winners going through to the semi´s, and the victors of those two bouts contesting the final for a winner take all prize.
All bouts are fought over a three round distance, and all stages of the contest are completed on the same evening.
The format has been a huge success, and every winner has gone on to a British, Commonwealth or European title fight.

When Harrison announced he was to enter, virtually every boxing writer, this one included, was reduced to ”last chance saloon” cliches, because that´s exactly what it was.
To his credit, Harrison came through his three bouts, despite a wobble in the final, and won the tournament, the 50,000 pounds first prize, and more importantly, a contract with Barry Hearn.

So now for Audley Harrison to realize his dream of a world title fight, he must take revenge on the man who handed him his most painful defeat; Michael Sprott.

Sprott, along with Harrison, Williams and Matt Skelton has been part of a quartet of British heavyweights who have dominated the domestic scene over the last decade.

Although 35 year old Sprott (32-14, 17 ko´s) has sustained almost as many defeats as the other three fighters combined, he hasn’t done too badly, and is in fact a former British, Commonwealth, and three-time European heavyweight champion.

Sprott has claimed his share of European scalps over the years, and his ‘win’ column boasts names like Timo Hoffman, Pele Reid, Danny Williams, Cengiz Koc and Renne Dettweiler, as well as Harrison.

Like the exciting but erratic former WBA heavyweight champion Mike Weaver who´s best years were the late seventies and early eighties, Sprott is a dangerous journeyman who´s record is misleading and is always capable of causing an upset.

This writer remains unconvinced about Harrison chances of winning the European title, never mind fighting David Haye for his world title. Harrison would have been a clear underdog against the super-fit Sosnowski, and would have lost badly, in my opinion.
The Sprott fight looks more winnable on paper, but when one considers how close rank novice Coleman Barrett came to stopping Harrison in last years Prizefighter final, his chances against Sprott don´t look so good.

Sprott may have lost four of his last six, but in 2009 he took undefeated Belarus juggernaut Alexander Ustinov, all 6´8´´ and 307 lbs of him to a close decision, and also went the distance with heavy hitting Lamon Brewster. He has been stopped just once in the last six years, and that was an eighth round TKO against former WBA heavyweight champion Ruslan Chagaev in 2006.

They say that lightning never strikes twice in the same place. Well, the venue might be different, but if Michael Sprott´s left hook connects with Audley Harrison´s jaw with the same amount of blunt-force-trauma it inflicted last time, this will prove an exception to the rule.

Sprott by a TKO in six.