Home Archive Will boxing learn anything from the case of Edwin Valero? 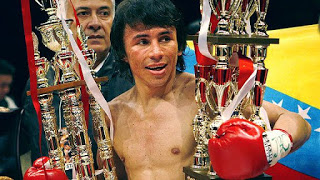 There are telltale signs in the life of a fighter that should not go unnoticed.

When lawsuits begin to accumulate as easily as knockout victories, when a fighter’s headlines can be equally divided between the sports and police sections, when every fight is preceded by a laundry list of legal run-ins — that’s when things can take a turn for the worse, when the steering wheel starts to veer toward the curb and a crash is imminent.
Edwin Valero, who died Monday in a jail cell in Caracas, Venezuela, knew all this. He had hit that curb more than once, sometimes literally. The former Central and South American amateur champion had amassed an 11-0 record (all by first-round KO) when a routine MRI revealed a small blood clot on his brain, the result of a motorcycle accident that occurred years earlier — a condition that initially kept him from being sanctioned to fight in the United States.) One of his last legal problems was a DUI charge that was still pending trial. Fast cars and lots of booze in the life of a boxer? Nothing new.
But Valero had other demons, as well.read more