Home Archive Amir Khan´t wait to fight in the States! 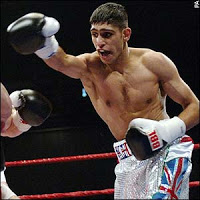 Bolton´s WBA world light-welterweight bomber Amir Khan has stated that he is looking forward to crossing the pond and fighting in boxing´s Mecca cities of New York and Las Vegas.
Despite the tremendous reception given to him by Geordie fans before and after his 76 second annihilation of Brooklyn based Ukrainian Dmitry Salita on Saturday night at Newcastle’s Metro Radio Arena, Khan said;
´´It’s everyone’s dream to go over to Vegas. Hopefully we’ll shock the world when we go to America. After that reception you don’t want to leave England. I’d like to fight in England and keep fighting here. But definitely, in the next year it would be a good move to go to the States to fight.“
Khan´s promoter Frank Warren backed his fighter´s desire to fight in the States;
´´Amir will go and fight in the States, of course he will. What boxer doesn’t want to fight at Madison Square Garden or in Las Vegas? He’s got the ambition to do that and prove himself over there. He will do that.“
Warren may well be wary of the attention his young charge has received from Golden Boy Promotion´s bigwig  Oscar De La Hoya and his business partner Shane Mosely during Khan´s  time in training camp in California. While Amir no doubt was star struck by the pair, Warren surely viewed their interest in a different light. To Khan´s credit, he has shown nothing but total loyalty to the promoter who signed him as an eighteen year old, and who did such a masterful  job in turning Khan´s career around after the disastrous Breidis Prescott defeat last year.
´´I want to sit down with my team and Frank and see what is out there,“ said Khan ´´Next year some time I want to go to the States. Hopefully we will shock the world when I go to America.“