Home Archive After The Loss To Broner, What´s Next For Paulie Malignaggi? 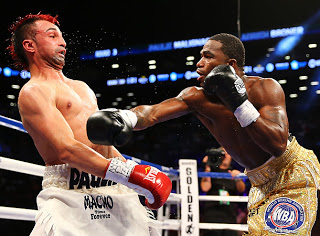 Paulie Malignaggi went down the only way he knows how on Saturday – fighting.
The Brooklynite may have lost his WBA welterweight title to Adrian Broner at the Barclay´s Center in his home-town, but he did far better than most fans and experts had predicted, and had the decision gone the other way, maybe it wouldn’t have been a total scandal.

23 year old Broner won a split decision by scores of 117-11, 115-113 against one score of 113-115. The two combatants are friends outside of the ring that go way back, although that friendship will be surely tested now, especially following Broner´s post-fight boasting about stealing Malignaggi´s girlfriend.

The New Yorker fell just short of labelling the fight a fix in his own post fight interview, and one felt his frustration. He had fought as well as he ever has, and clearly out-punched Broner. The problem is Paulie cannot break an egg with his punches, while Broner, despite stepping up from lightweight and fighting at welter for the first time, clearly had the edge in power. Malignaggi finished the fight badly marked up and swollen, while Broner´s face was virtually unblemished.

Broner, so long as he stays focused, has a bright future, and can look forward to fights against the best in the world from 135 lbs to 154 in the next 2/3 years.

But what´s next for Malignaggi? He was showing talent as a boxing annalist on Showtime, but that gig may now not be guaranteed following Saturday night´s outburst. At 32, time is not on his side, but he did look as good as ever vs Broner, and he must have a few decent bouts left in him.

Nobody wants to see Paulie get smashed to pieces (okay, maybe some of you do) so lets not see him matched with either of that Argentinian two man death-squad otherwise known as Marcos Maidana and Lucas Matthysse. There is talk of a rematch with Amir Khan, but while it might be closer this time – especially at 147 – Malignaggi is probably the only guy on the planet who is no threat to the Brit´s chin.

If Paulie chooses to stay at welter, a fight against Robert “The Ghost” Guerrero would make a lot of sense, and would be wildly entertaining. Malignaggi would also be an excellent test for Britain´s unbeaten Kell Brook in a fight that he would have a shot at winning.

If he chooses to drop back down to 140, a fight between Malignaggi and Josesito Lopez would be a genuine crowd pleaser that could go either way, but one that Paulie might be favoured to shade.

When Malignaggi suffered three defeats in two years between 2008 – 2010, two by TKO, his best days looked behind him. His performance against a man many rate as one of the best in the world pound-for-pound proved that The Magic Man is not done yet.