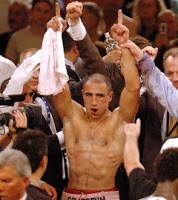 The second round Showtime Super Six Word Boxing Classic matchup between tournament favorite; undefeated Armenian Arthur Abraham ( 31 – 0, 25 ko´s) and once beaten American Andre Dirrell (18-1, 13 ko´s),
scheduled for January in New York has been postponed due to a reported illness of Abraham.
The bout has now been re-scheduled for March 6th at the Agua Caliente Casino in California.
Dirrell lost his first round match on a split decision challenging Britain’s Carl Froch for his WBC super-middleweight title. Abraham, the former undefeated IBF middleweight champion, had the most impressive of all the first round bouts, dominating former undisputed middleweight champion Jermain Taylor before knocking him out in the twelfth round.
Big Fight odds; Abraham 5/8, Dirrell 5/6 bet365
Super Six odds;