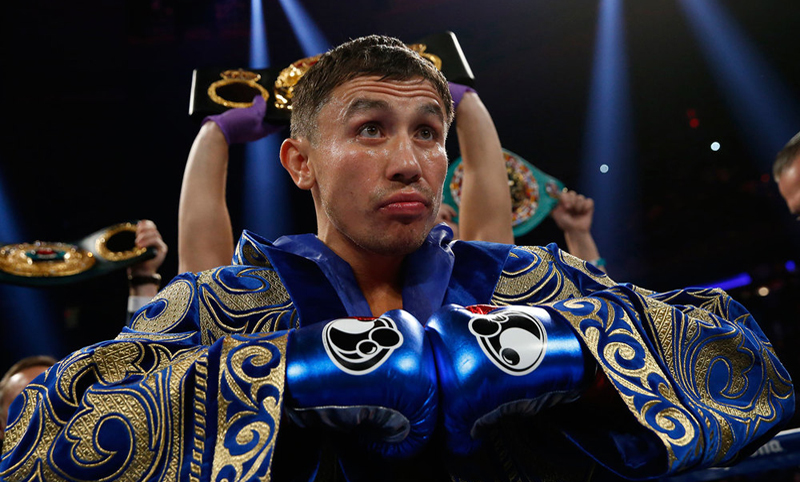 Thus far the only mandated bout for Golovkin is his unification fight with WBA regular champ Daniel Jacobs, and even that isn’t nailed down. Tom Loeffler, the US managing director of K2 Promotions is hoping to secure the contest when the fight goes to purse bids on December 19 at the WBA’s offices in Panama City, Panama. As the WBA Super Champion, Golovkin is entitled to 75% of the purse, leaving Jacobs 25%.

Jacobs has stated he wants a 60-40 purse split to fight Golovkin, giving him a larger chunk of a possible $5 million combined purse, which appears to be the main sticking point. The prime bidders for the rights to stage the fight will be K2 Promotions and Jacob’s promoter Al Haymon. Here’s Tom Leffler’s take on the situation:

“First we have to deal with the issue of the mandatory fight with Jacobs, we will see how things work out, we will try to reach an agreement before the auction and we will see if after that there are big fights with Chavez and Canelo.” Loeffler told ESPN. “It would be great to have all those fights, Golovkin is the number one in the world and Jacobs is number 2. Let’s go step by step, Jacobs is tough, and it’s a great combination. Pounds and could be in that weight, but with Canelo we know that it is the biggest fight that can have now.”

If he doesn’t get the deal he wants, Jacobs may choose to step aside, something Loeffler hopes won’t happen.

34-year old Golovkin (36-0, 33 KOs) has been an electrifying presence in boxing since turning pro a decade ago. Since GGG won the WBA middleweight title in 2010 he has made 17 title defenses, winning all by stoppage and taking out the likes of Grzegorz Proksa, Gabriel Rosado, Curtis Stevens, David Lemieux and the British trio of Matthew Macklin, Martin Murray and most recently Kell Brook, who was stopped in five rounds.

29-year old Jacobs (32-1, 29 KOs) was considered one of US boxing’s brightest young stars before losing by fifth round knockout in a WBO middleweight title fight against Dmitry Pirog in 2010. Since then Jacobs has overcome cancer and resurrected his career, winning the vacant WBA regular title with a 5th round KO of Jarrod Fletcher in 2014.  Sandwiched in between a pair of TKO title defenses against Sergio Mora is Jacobs’ most impressive win, an 85-second blitz of the highly rated and previously unbeaten Peter “Kid Chocolate” Quillin. While Golovkin would start as a heavy favorite to continue his hot streak against Jacobs, many experts believe that the American has the power to at least cause the rampaging Kazak some problems.

Should he get past Jacobs, Julio Cesar Chavez Jr. could be next for GGG. The former WBC middleweight champion and son of Mexico’s greatest ever fighter is on the comeback trail and looked okay scoring a ten-round decision over Dominik Britsch last weekend. The Chavez name and the rabid support of Mexicans both at home and in the US makes any fight involving JC Jr potentially huge, and Golovkin for one is excited about the possibility.

“Chavez Jr. could happen in May, but they should talk with Tom to see if it can be done. That is the fight of my dreams, I think the styles will gel very well and it will be a spectacular fight.”

However, as we go to press the internet is abuzz with talk of current WBO light middleweight champion Saul Canelo Alvarez signing to fight Chavez Jr. at a catch weight of 165 lbs.

Speaking of Canelo, the flame-haired Mexican is clearly the fighter whom K2 and Golovkin really want, and the one with whom a fight would generate huge interest and revenue. Canelo’s promoter Oscar De La Hoya has gone on record as saying that GGG vs Canelo will happen in 2017. In a recent appearance on ESPN, De La Hoya told a dogged Stephen A. Smith and Max Kellerman:

“You have my word and Canelo is not afraid of Triple G. September, we’re hoping he signs the contract and it will happen.”

Of course, the phrase “signs the contract” is key in that sentence, as Oscar will be looking to take the lion’s share of the purse for his fighter, leaving the scraps for Golovkin. If that is the case, GGG might well have to suck it up and accept a measly $10 million or so just to get the fight made!