Home News Gennady Golovkin Will Take On Danny Jacobs At MSG On March 18! After months of to-ing and fro-ing, one of boxing’s most anticipated fights for early 2017 was finally announced on Saturday, when representatives of Gennady “GGG” Golovkin and Daniel Jacobs agreed terms for a March 18 WBA middleweight unification fight to take place at Madison Square Garden, New York, and to be shown live on HBO PPV. Middleweight champion Gennady Golovkin chose twitter to announce the details:

It's official, I'm fighting Danny Jacobs on March 18 at MSG @thegarden NY on HBO ppv, see you there! pic.twitter.com/hljRlnh0LS

K2 Promotion’s US representative Tom Loeffler, the man who looks after the interests of Gennady Golovkin, and Daniel Jacobs’ manager/promoter/advisor Al Haymon have been at loggerheads over this fight since September, soon after both men defended their respective titles just one day apart. 29-year old Jacobs (32-1, 29 KOs) stopped Sergio Mora in seven rounds in a rematch on Friday September 9. The following night in London, 34-year old Golovkin (36-0, 33 KOs) TKO’d Britain’s IBF welterweight champion Kell Brook in the fifth in what was his 17th title defense 23rd consecutive win inside the distance. He is now just three defenses short of the middleweight record of 20 set by Bernard Hopkins.

However, negotiations went painfully slowly, with the bout originally slated for December 10 before the Jacobs camp withdrew. Heading into December it looked as though the fight would go to purse bids, which would mean that Golovkin, as the WBA’s super champion, would have been entitled to 75% of the winning bid, with Jacobs receiving the remaining 25 percent. Although as of yet the fighters purses have not been disclosed, it would appear that Jacobs will be getting substantially more than the 25% of the total purse he had been looking at.

Whatever the split, both fighters seemed pleased with the outcome:

“It’s big news for me. I am very excited,” said Golovkin to reporters soon after the announcement. “I think it’s a very big fight and great fight for you guys to watch. Danny is an amazing fighter. He is a tough opponent and No. 2 in the middleweight division. He is my toughest opponent. Hopefully, I fight three times next year. There are big plans for 2017 (but) right now I am focused on Jacobs and I am here to fight.”

“I’m excited about facing GGG and proving I’m the best middleweight in the world,” Jacobs told ESPN. “On March 18 I’m bringing all the belts back to Brooklyn with me.” 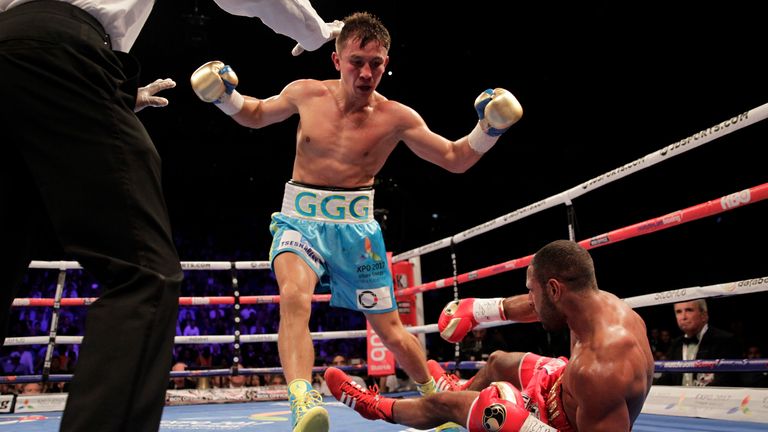 Commercially Golovkin vs Jacobs isn’t anywhere near the juggernaut that a fight with current box-office no.1 Saul Alvarez would be, nor is it likely to be even as big an event as was GGG’s bout with Brook at the O2 Arena, but it is an interesting contest nevertheless. Jacobs has only one loss on his record, a 5th round KO defeat to Dimitry Pirog in a WBO title challenge in 2010, a bout which Jacobs was actually winning at the time of the knockout. Pirog was himself an exceptional fighter who was never beaten as a pro and was forced to retire due to back issues.

Since that defeat, Jacobs had to overcome a bout with cancer as well as rebuild his career, and he done both to great effect.  At 6’ tall and with a 73” reach, Jacobs is a big middleweight, and he will have two inches in height and three inches in reach over GGG. He can also crack, as was amply displayed in his first round KO of Peter Quillin last December.

Top-5 All-Time-Great Sugar Ray Leonard, himself a former world middleweight champions had this to say about the matchup when it was first mooted back in September:

“There is talk of a possible fight with GGG and Daniel Jacobs. You guys know how I feel about Triple G and he gets better, and better, with each fight, each time out. Daniel Jacobs, I love this young man. He’s proven himself each and every time. My good friend Sergio Mora told me that this guy hits so hard that you don’t even realize, he hits like a heavyweight. This fight here, if you look at the papers, GGG by far wins. But if you know Daniel Jacobs – it’s a fight. This fight here will be determined by who hits who first, pretty much – and who stays in control. This is a fight you can’t miss.”

However, already Golovkin seems almost mythically special; from his funny yet charming “Big Drama Show” soundbites, his ever-smiling choir-boy countenance that disguises a cold-blooded ring assassin, his slim, almost puny physique that generates effortless yet crushing power, to his textbook boxing skills forged over hundreds of bouts in the Eastern Bloc amateur system, GGG looks to be on a path that will one-day place him alongside middleweight legends like Stanley Ketchel, Harry Greb, Sugar Ray Robinson, Carlos Monzon, Marvin Hagler and Bernard Hopkins.

That is unless Danny Jacobs has other ideas…