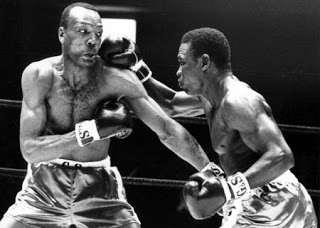 Looking back over the decades of the last century there have been a handful of special and in some cases spectacular champions in the light heavyweight division,
but few managed to cut the swath through its ranks the way Bob Foster did in a reign that lasted just over six years. So dominant was his tenure atop his weight class many boxing historians today consider him to be the greatest light heavyweight world champion since that division’s creation in 1903.

Born in April 1938 in Albuquerque, New Mexico, he took home the silver medal at the 1959 Pan American Games. He turned professional in March 1961 with a two-round knockout over a fighter named Duke Williams in Washington, DC. In fact, for first three years of his career he primarily campaigned on the East Coast of the United States or abroad in locales such as Montreal, Canada or as far away as Lima, Peru. He first tasted defeat in his tenth professional bout at the hands of Doug Jones fighting over the light heavyweight limit, as a substitute in a bout for Zora Folley, losing by 8th-round TKO.

Standing 6’3 with a 79’ reach Foster was as imposing a specimen as one could possibly ask for as a light heavyweight, and the handful of times he ventured northward to contend in the heavyweight division, he found himself chopped down by the naturally bigger fighters despite underpinnings that suggested success at the higher weight. After that brief heavyweight interlude, he scored two quick stoppage wins before losing a unanimous decision on hostile soil to hometown hero Mauro Mina, a vastly more experienced professional with a 42-2 record out of Lima, Peru.

Returning to his campaign in the United States, Foster managed to score three additional quick stoppage wins over the next several months before the allure of the heavyweight division once again found him sharing the ring with a man much bigger than he was originally conceived to face, the world-rated 6’6 Ernie Terrell, a talented fighter that would one day go on to win the WBA Heavyweight Title. Losing by 7th-round knockout, Foster focused on foes more in line with his natural weight, finishing 1964 with three knockout wins, the last of which being a 9th-round stoppage over former world title challenger Henry Hank at the Municipal Auditorium in Norfolk, Virginia.

In 1965 Foster resumed his winning ways, for the most part, posting three knockout victories and a wide unanimous decision rematch win over old foe Henry Hank before again falling victim to a notable heavyweight contender, thanks largely in part to his ego and the allure of the sport’s flagship division and the potential money such a win could bring. Although his foray to heavyweight had largely proven to be a source of bitter frustration, he found himself ranked for his ever increasing body of work at one-seventy-five. Working diligently at becoming a success, Foster opted to pour his focus into becoming a top light heavyweight. Returning a full year after the decision loss to Zora Folley, Foster closed 1966 with a two-round knockout over non-descript foe Leroy Green before finally hitting his stride with a brilliant sweep through 1967, a year which saw him go to the post seven times, posting six knockouts. Among the fighters he beat were veterans Eddie Cotton, Eddie Vick, and limited but rugged heavyweight journeyman Sonny Moore. After dispatching the “S.D. Policeman” in five rounds, Foster found himself ranked as the world’s number one light heavyweight challenger. 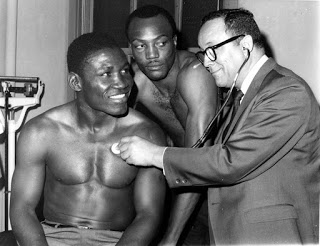 In May 1968 he found himself staring across the ring in Madison Square Garden at light heavyweight champion Dick Tiger. For Foster, the moment had finally come and in retrospect Tiger, a game if somewhat smallish 57-17-3 two-division champion, found himself completely outsized and outclassed up until the moment he was separated from his senses. At 2:05 of the fourth round Bob Foster had won the WBA/WBC Light Heavyweight titles, thus began one of the most dominant reigns ever in the division then just below that of heavyweight. Staying active, Foster fought three non-title tune-ups to close out his greatest year yet, two of them again at heavyweight before paring down for the third at light heavy.

In 1969 for his first title defense against rated Frank De Paula, Foster had to get up off the canvas in round one, charging back to flatten his emboldened foe moments later that same round. Four months after that close encounter the champion obliterated the 24-4-5 Andy Kendall in his second title defense before closing out the decade of the 60’s with two non-title knockout victories.

In 1970, Foster entered the ring on two occasions to again try his hand at heavyweight. He hammered journeyman Cookie Wallace in six rounds despite staying extremely close to his natural light heavyweight tonnage.  Next was a title defense against the 34-10-4 Roger Rouse which in essence was a rematch with an opponent Foster had stopped on cuts two years before. Infuriated by comments previously made by the manager of Rouse regarding the fact that Foster had stopped Rouse in their first bout but was not able to drop him, the now peaking champion dropped the challenger a total of five times en route to a fourth round knockout victory in their pivotal rematch. Three months after that Foster stopped the 30-1 Mark Tessman in ten rounds to post his third successful title defense.

Such was the compelling nature of Bob Foster’s dominance as the world light heavyweight champion, and as demanded by his competitive instincts and ego, Foster closed out the year by challenging the great “Smokin’” Joe Frazier for the WBA/WBC heavyweight titles. Boxing history to that point was replete with punctuation that featured a dominant light heavyweight champion’s challenge of a reigning heavyweight king, but in November 1970 the sport saw this latest incarnation of that tradition occur at a point where two of the most feared hitters of the day faced each other at the sheer height of their powers. 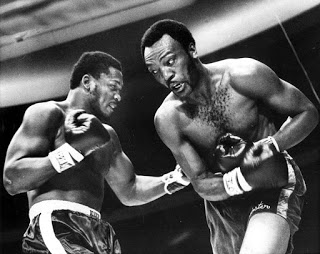 Towering over the 5’11 Frazier, Foster started at full speed, constantly circling to his left behind a busy left jab as he desperately tried to keep an ever advancing Frazier at a comfortable range in the hopes of pot-shotting him with his vaunted right hand. Having landed several flush right hands to no noticeable effect, Foster was forced to fight in reverse as Frazier pasted his flanks with heavy body shots. In round two Frazier’s aggression found him the necessary range to land his left hook flush on Foster’s jaw, abbreviating matters and ensuring that to that point in boxing history, the heavyweight title would not be claimed by a challenging light heavyweight champion.

After the Frazier disaster, Foster knocked out Hal Carroll in four rounds to defend his crown. Meanwhile the WBA stripped him of their version of the title, thus he carried on as WBC champ. Foster became enraged with the WBA, which proceeded to have Vicente Rondon of Venezuela and Jimmy Dupree fight for their vacant belt. Rondon won, becoming the second Latin American light heavyweight champion to that point in history, setting the stage for a lucrative grudge-based unification showdown. In the meantime, Foster continued to defend his WBC world title regularly, turning back the challenge of Ray Anderson, Tommy Hicks, and Brian Kelly. Of those three, only Ray Anderson managed to take Foster the full 15-round distance.

In April 1972 Foster and Vincente Rondon met in a WBC/WBA unification showdown. The result was as anti-climactic as it was shocking, with the champion crushing the pretender to his throne in two short rounds. After re-unifying the titles, Foster utilized what many boxing historians feel might very well have been one of the best single punches in history to retain his title in four rounds against an intimidated Mike Quarry who up until that point was an undefeated 35-0. 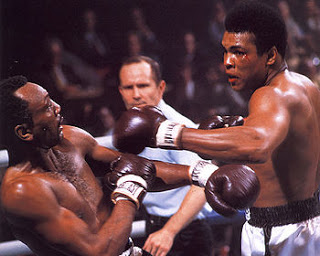 Buying into the whispers of those around him and to the unquenched ambition within his soul, Foster again went against the grain of better judgment, moving up to challenge former heavyweight champion Muhammad Ali who was on a roll in his effort to reclaim his position atop the sport. After troubling Ali early and managing to cut him, Foster himself was cut down to size as Ali stepped on the accelerator, dropping him four times in round five, twice in the seventh and for the count in round eight. The Ali drubbing proved to be a turning point for Bob; he never again would stray beyond the confines of his best weight having learned he simply wasn’t cut out to deal with the great heavyweights of the period.

In 1973, Foster retained his title twice, posting two unanimous decision victories over talented South African Pierre Fourie. Their rematch had a distinct social impact as it was contested in Apartheid-ruled South Africa. Foster became a hero to South African Blacks by defeating Fourie, a Caucasian, in their first contest, and later again in their rematch, the first major world title fight in South Africa since Apartheid. If anything though, the Fourie bouts illustrated that at age 35, the sand was quickly dissipating from Foster’s hourglass. In June 1974 he posted his last successful title defense, struggling to extend his stay as champion a while longer, holding challenger Jorge Ahumada to a 15-round draw. After having been dropped by the spry challenger, Foster did everything he could to hold onto his championship as his greatness was overtaken by the ravages of ring mileage and Father Time. Shortly after, in September of that year he announced his retirement, relinquishing the World light heavyweight championship. 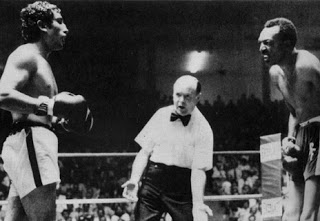 A year after having walked away from the sport, Foster attempted to chase the accomplishments of his past, posting five wins over nondescript opposition before being sledge hammered by the 8-1 Mustafa Wassaja in 1978, a talented fighter who would eventually go on to challenge the great Michael Spinks for the WBA light heavyweight title Foster once held some years down the line.

Bob Foster answered all of the questions ever asked of him as the World light heavyweight champion. He unified the titles when the opportunity presented itself and left no question as to who was the best in his division. Along the way he compiled a fine record of 56-8-1 with 46 KO’s, most of which are highlight reel vintage. Some years ago he was rated as #17 in Ring Magazine’s list of the 100 greatest punchers of all-time.

In his much deserved retirement, the former world champion joined the Bernalillo County Sheriff’s Department, where he became a highly respected officer in the Albuquerque area. Today Bob Foster is a rightful member of the International Boxing Hall of Fame. Regardless of who you might rate as the greatest light heavyweight champion of all-time, Bob Foster is right there near the very top. Few if any enjoyed a reign as dominant as was his. For many, there has never been a better or more dominant champion at one-hundred and seventy-five pounds.