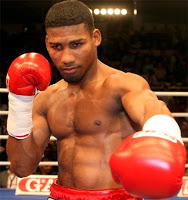 Undefeated Cuban sensation makes first defense of his WBA crown
Cuban sensation Yuriorkis Gamboa makes the first defense of his WBA world featherweight title in the early hours of Sunday morning when he takes on tough Rogers Mtagwa of Tanzania at New York´s legendary Madison Square Garden.
The Gamboa v Mtagwa clash is the chief support to the WBO featherweight title fight between defending champion Steven Luevano of the United States, and challenger and former WBO super-bantamweight champion, Puerto Rican superstar Juan Manuel Lopez.
Gamboa (16-0, 14 ko´s) knows an impressive display against the man who gave Lopez nightmares in his last fight and came within a whisker of beating him could lead to a lucrative unification fight against the winner of Lopez v Luevano.
The gold medal winner in the flyweight class at the 2004 Athens Olympics, Gamboa was one of the darlings of the Cuban boxing squad. A four time Cuban national champion, Gamboa also won gold at the 2003 Pan-American Games, and in the 2006 Boxing World Cup. He was expected to compete in the 2008 Beijing Olympics,
but while on a training camp in Venezuela, Gamboa and fellow teammates Odlanier Solis and Yan Barthelemy slipped out and made their way to Colombia, and then on to Germany, where all three turned professional.
Desperate for cash, Gamboa sold his Olympic gold medal and sent the money back to his family in Cuba. While waiting for a visa to the United States, Gamboa fought five times in Germany and once in Turkey. Since then he has fought exclusively in the United States.
The muscular, baby faced 28 year old from Guantanamo, now based in Miami, has hit the ground running since turning pro less than three years ago. Within a year of making his pro debut he had gate crashed the world rankings, knocking out Johnnie Edwards in one round to win the North American Boxing Federation super-featherweight title. In his next bout he won the WBC International super-featherweight title with a points win over Darling Jiminez.
After the Jiminez fight, Gamboa decided that he would be more affective at featherweight. In his next bout, he looked awesome, knocking out contender Al Seeger with a vicious right hook in one round. After four more knockouts, Gamboa challenged Panamanian Whyber Garcia for his WBA featherweight title on the undercard of Juan Manuel Lopez WBO super-bantamweight title defense against Rogers Mtagwa.
While Lopez had to fight for his life that night, Gamboa was a sensation, blowing away Garcia in four rounds. Now Gamboa goes head to head with the man who gave Lopez his toughest fight.
With a less than impressive record of 26-13-2, with 18 knockouts, Rogers Mtagwa would seem an unlikely danger-man.
After turning pro at just 17 years old, Mtagwa fought his first twelve fights on the African continent, before uprooting to Philadelphia at the age of twenty. He has been based in Philly ever since, and has developed a classic Philadelphia style of fighting; bobbing and weaving and looking to land with big hooks. At just 5´5´´, Mtagwa´s build is ideal for this style of combat.
Mtagwa has been a hot and cold competitor in his ten years of boxing in the United States. He can be exciting to watch, and has frequently shown uncommon valor, typified in his sensational fight with Tomas Villa in 2008, in which Mtagwa climbed off the canvas in the ninth and appeared out on his feet, only to come back in the tenth to floor Villa three times for the victory.
One win later and Mtagwa was giving WBO super-bantamweight champion Juan Manuel Lopez all he could handle. Lopez took the early rounds, flooring the wide open Mtagwa in the fifth, but from then on the fight became a wildly exciting brawl; easily one of the best fights of 2009. Mtagwa had Lopez in desperate trouble at the end of the eleventh, and again in the twelfth, but the Puerto Rican hung on for a majority decision win.
Along with the super-middleweight and welterweight classes, the featherweights are one of the most exciting, talent laden divisions in boxing.
Gamboa posses one of the most exciting styles in the sport. Fast, heavy handed, he is not afraid to take a punch to land his own, a tactic that might prove disastrous against a sharp-shooter like Lopez.
But against Rogers Mtagwa, it adds up to what should be a thriller. If both men can stay on their feet for half a dozen rounds, we could be looking at the fight of the year. The big difference between the two will be down to punching power; while he can bang, Mtagwa does not posses chilling punching power, whereas Gamboa possesses it in abundance, and that will be the clincher. While it lasts it will be a peer six brawl.
Gamboa by a knockout inside five rounds.
Big Fight Odds; Gamboa 1/12 Mtagwa 6/1 bet365