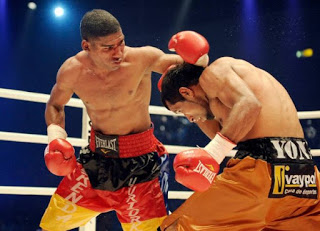 Cuban-born, Miami resident, Yuriorkis Gamboa (pictured at right) dropped his rival in the eighth round on Saturday night on the way to a lopsided, 12-round unanimous decision over previously unbeaten Jonathan Victor Barros in the third defense of his WBA featherweight (126 pounds) title at The Sporthalle in Alsterdorf, Hamburg, Germany.

The victory ran the 28-year-old Gamboa’s record to 18-0, with 15 knockouts, dropping the 26-year-old Barros, of Argentina, to 28-1-1, with 16 KOs and setting up Gamboa’s meeting with the winner of an April 10 clash between 33-year-old, WBA super bantamweight (122 pounds) champion, Celestino Caballero, and Indonesia’s 22-year-old, Daud Yordan on July 17 or 24 in Las Vegas. more