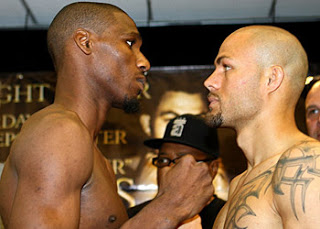 Paul ”The Punisher” Williams, the 6’3” former two-time WBO welterweight champion, stays active as he waits for the super fight he feels he deserves
when he takes on big punching former IBF welterweight king – Puerto Rican Kermit Cintron at the 8000 seater Home Depot Center in Carson, California in the early hours of Sunday morning.

30 year old Cintron (32-2-1, 28 ko´s) has lost just twice in his career, both stoppage losses to disgraced Mexican former WBO and IBF welterweight king Antonio Margarito. Cintron was stopped in five rounds by Margarito in April 2005 in a challenge for the Mexican´s WBO welterweight title, and in April 2008 Cintron lost his IBF version of the title to Margarito via a 6th round TKO.

Last February it looked as if Cintron had been knocked out against Argentinian Sergio Martinez, the man who recently beat Kelly Pavlik for the WBC and WBO middleweight titles. A thumping straight left floored Cintron heavily at the end of the fourth, and the referee counted the Puerto Rican out, even though he had gotten to his feet. Martinez celebrated his victory accordingly, but some three minutes later, it was announced that Cintron had indeed beaten the count, so the fight continued. In the final round, the referee instructed the ringside judges to take a point from Martinez´ scorecard for hitting the back of Cintron´s head. The deduction was enough to gain Cintron a face saving draw, when just 30 minutes earlier he had been staring a knockout defeat in the face.

Last May Cintron put himself right back in the title picture, outpointing previously unbeaten Mexican slugger Alfredo Angulo in a WBC light middleweight title eliminator. With 28 knockouts from his 32 victories, the Puerto Rican has long been respected as one of the deadliest punchers in the welterweight and light middleweight divisions.

28 year old Paul Williams (38-1, 27 ko´s) often refers to himself as the ”most avoided fighter in boxing.”
As well as being freakishly tall, Williams boasts an incredible 82” reach, that´s 2” longer than the reach of both Muhammad Ali and Larry Holmes. South Carolina born Williams can also fight effectively at welter, light middle and middleweight. He was scheduled to fight Pavlik last November, but the then WBC and WBO middleweight champion withdrew with a staff infection in his left hand.

Williams two standout victories so far have been his decision victory over a peak form Margarito in July 2007 for the Mexican´s WBO welterweight title, and his comprehensive thrashing of Ronald ”Winky” Wright in April 2009.
Wright, a former IBF, WBC and WBA champion at light middleweight and one of the best boxers in the business, won a total of just two rounds on the judges combined scorecards.
In what remains his only setback, Williams was upset by Carlos Quintana in February 2008, losing a surprise decision and his WBO title, but gained revenge just four months later, crushing Quintana in one.
Last time out, Williams received a majority decision over Sergio Martinez after the pair had swapped first round knockdown´s and then proceeded to wage war for twelve frenetic rounds in one of the best fights of 2009. Two judges gave the fight to Williams with the third calling it a draw, although many at ringside thought the Argentinian had done enough to get the decision.

Naturally, Williams wants a crack at new middleweight king Martinez, but he has also recently called out Floyd Mayweather after his lackluster display last Saturday against Shane Mosley. Whether it´s against Martinez or even Mayweather, as long as Williams keeps winning, the super fights will surely come.

Against the big punching but one dimensional Cintron, Williams must protect his chin, because anyone the Puerto Rican hits, he can hurt.
Look for Williams to turn it on tonight. Against ”Winky” Wright he averaged 100 punches per round and Cintron could feel he is on the receiving end of a leather shampoo.
Williams will soften up Cintron for a few rounds before planting his feet and taking him out.

Williams by fifth round TKO.