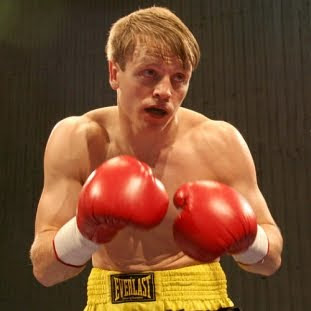 Sam Webb shrugged of a severe cut and the manic antics of opponent Anthony Small to grab Small´s British light-middleweight title in a dramatic fight at the Goresbrook Leisure Center in Dagenham, Essex last night.

The bout was the co-feature alongside Mathew Hatton´s European title fight with Gianluca Branco.

The controversial Small entered the ring to a crescendo of boo´s, wearing a full white tuxedo and matching trilby. Despite the bravado, it was clear from the first round that Small was nervously respectful of Webb, who had twice beaten him when the two were amateur rivals in London.
Small likes to call himself ”Sugar Ray Clay Jones Jr” in reference to his idols Ray Robinson, Muhammad Ali and Roy Jones. This writer had likened him more to Kirkland Laing. In his title-winning fight last year against Anthony Hall, Small had looked sensational, world class even.
However, on this night 28 year old Small (23-2, 16 ko´s) boxed like none of the great fighters mentioned above. Whether nervous or overconfident, the result was a manic, jerky, praying mantis like performance that was truly bizarre. There was an American fighter called Manning Galloway who held the WBO welterweight title in the early 90´s, who style was so bizarre, it was uncomfortable to watch. Last night, Small reminded me of Galloway.
On the rare occasions when Small chose to box more conventionally, he looked a different class to Webb. But he would soon revert back to doing an impression of a man suffering from St Vitus Dance.
To his credit, 28 year old Webb (16-1, 4 ko´s) stuck to his game plan. Not a big puncher, he relied on his boxing skills and high work rate, and kept a cool head, even when Small cut loose with wild, desperate punches.
Webb sustained a nasty cut above the eye in the fifth after a head clash. The sixth round was sensational, one of the best domestic rounds of boxing seen this year, as Small chased the stoppage, and Webb fought back for dear life. Between rounds, Webb´s cutman Mick Williamson performed his usual miracles with the injury, and the cut´s potential relevance to the fights outcome was kept to a minimum.
Down the stretch it was Webb who finished the stronger. Small seemed to have expended so much energy, he looked unable to mount any sought of counter attack that might have saved his title.
The result was a majority decision, but this writer had Webb winning by a comfortable 116-112, or eight rounds to four. When the eye heals, Webb can look forward to exciting domestic matchup´s with Matthew Hall and even Ryan Rhodes.
As for Anthony Small, he desperately needs a trainer who can hone his undoubted talent and limit his eccentricities. Until that happens, we will never see the best of one of Britain’s most naturally gifted fighters.