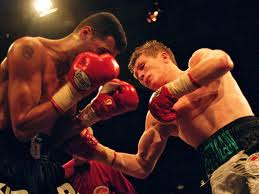 I’m on POF, cruising the forums; what a wasteland.  I log off and Google Ricky Hatton vs. Tony Pep.

The page comes up, a menu, and I pull up a Pep training video.  There’s the gym.  Pep’s hitting the speed bag, skipping rope, shadow boxing.  He’s fluid; an old pro.  There’s the gym.  Hanna. Hanna trained for over a year for her first fight at, I think, 122.  Hanna is concise, economical and pretty to watch.  She is a pretty fighter.  I don’t mean like a pretty lady fighter. I mean like the pretty you get when you put a lot of work in. She makes it look easy.

There’s Peter, a second generation Polish/Canadian heavyweight; blond/blue, 6’5”; a nice looking kid and a sweet guy.  He’s hitting the heavy bag.  One evening we took Peter out to a gym on Lougheed to spar with another heavyweight. Well the guy was more of a cruiser-weight but he had nine pro fights to Peter’s zero fights at all.  They had sparred before and the guy had knocked Peter down.

On the way out there Pep tells Peter that the guy will try to knock him out.  Peter is nervous.  But basically when you go to another guy’s gym like that, it’s a fight.  It will feel that way.
We get there and they glove up.  Peter is tight and he is getting hit a lot.  He is over-thinking his moves and it puts him one step behind.  When the other guy forces him to the ropes and starts unloading, Pep is telling him, “Weather the storm, weather the storm; weather the storm…” He is talking him through it.  The guy will wind down eventually.  You find occasional openings. Take the leavings.  Keep yourself in the fight and your turn will come.  Just make sure you don’t get hurt.  Pep was good at that.  Watch his fights.  Cover and move and counter.

By the second round Peter gets fed up with eating leather and he starts fighting back.  He stops thinking and starts punching and he is being effective.  After all, he’s bigger, he should bully.  I start laughing, “That’s it!”  I’m excited.  Now Peter gets some respect.  The guy slows down some.  Finally it’s over; three long rounds.  Peter got the worst of it but he got something real.  He survived.  He even fought back.  We tell him, “Your first fight will be easier than that.”

When I first started coming around Pep’s gym I wasn’t sure what I could contribute.  I was trying to get in shape myself but it was an uphill battle to say the least; because my back is messed up.  I didn’t really feel like I could coach around there because Pep knows so much.  Watch his fights.  They are on you-tube.  He fought Hatton.  They got Pep on five days notice.  They wanted a name and they wanted a safe fight.  They dangled a lot of money in his face and he had to fight way over his optimum competitive weight.  Never mind all that.  It’s his professionalism that comes through.

I left Vancouver in 1986.  Pep is a kid.  I see him twenty some years later, he’s a man.  Plus he took a rare journey.  Not many; not many people walk that road, and not just that but he reminds me of Jamie. Jamie Ollenberger.  There is something lovable about fighters.  Their familiarity with violence humanizes them somehow; some alchemy.

See ye me and live