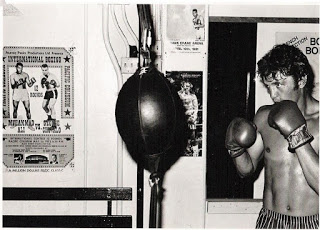 Man in the mirror was getting a lot of airplay in the fall of 1987.  Whenever I hear it now I remember coming out of the Golden Gloves Gym in Vegas and driving up Maryland Parkway in my big 69 Chrysler.

My best friend Jamie had moved to Vegas from Vancouver and I had been in Vegas since June.
I worked as a masseur at Ballys; my first Vegas job.
Alex Fried was Jamie’s sponsor and manager in Vegas.  At the time he moved to Vegas Ollenberger had three professional losses on his record.  The last one was a moral victory loss to Gato Gonzalez in Stockton.  A ten round points loss but the crowd thought he won.

Fried put his fighters up at a cheap apartment complex on Koval near Harmon.  If you don’t work in Vegas there is not a whole lot to do.  Fighters get bored to death.  You work out, then what? Drink?  Gamble?  No.
I had two week days off.  The gyms in Vegas are open in the day time.  Everybody works at night.  I was getting only 6 to 8 rounds of sparring a week and I was 32 at this time.  The amateur cutoff in the States is 34.  At any rate I didn’t fight again I just stayed in shape.
Around this time there was a prospect making a name for himself at 140 pounds, Engels Pedroza. He racked up an impressive string of early round knockouts.

Fried got Jamie a fight with this guy at the Inglewood Forum in LA in December of 1987.  I went out there with him.  We stayed in the hotel right by the forum.  Jamie was in great shape and I had never seen him so up for a fight.  The hotel was filled with fighters and fight people.

This fight was for the Continental Americas Junior Welter Title; whatever the fuck that is.  But it was a title.

Jamie and I were sharing a room.  We went down on the elevator and there is a big black guy, maybe an ex-fighter, but anyway part of the show.  A guy gets on. “Is this elevator going down?” Silence.  Long pause.  Black guy, deep voice: “Going down.”

Everybody laughs.  The weigh in was in the morning.  We’re in the room resting for the fight and there is a knock on the door.  Someone talks to Jamie.  He is dropped off the card because his medical shows brain damage; which maybe.  But who isn’t brain damaged?
I mean he had already weighed in! Jamie figured that Pedroza’s handlers got wind of the loss to Gonzalez.  Gonzalez was an esteemed champion that was voted into the Boxing Hall of Fame in 2004; voted one of the top 100 punchers of all time.  So…see what I’m saying?
Anyway, he got knocked off the card.  And brain damage or not he was cleared to fight subsequently.

A knockout artist like Pedroza, if you can pull him into the later rounds is vulnerable.  He did get knocked out by Mike Johnson, a black fighter in 1988.  Ninth round TKO.
Pedroza kind of faded after the loss.  Jamie was never the same after what happened there in Inglewood.  He felt sure he could beat Pedroza and it would have been a big step up for him.