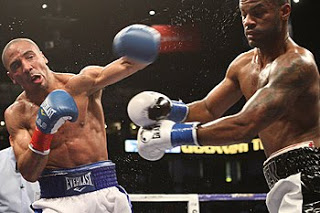 It was not an especially artful world championship fight, nor was it particularly memorable — except for the brilliant strategy employed by the winner.

With a second successive dominating performance in the Showtime Super Six Boxing Classic, Andre Ward retained his World Boxing Association super middleweight title Saturday night before a rollicking partisan crowd of 8,797 at Oracle Arena.
Ward moved into the next round of the tournament after smothering Allan Green into submission to take a 12-round unanimous decision. All three ringside judges — Marty Sammon, Glen Feldman and Alfredo Polanco — gave every round to Ward.
How dominant was Ward? Green offered a few quick excuses, saying he felt drained and weak — then went straight to the hospital to get checked out.
“He got roughed up by (Ward),” conceded Lou DiBella, Green’s manager and representative in the postfight news conference.
To which Ward responded with two sarcastic words: “The hummingbird.”
That’s one of the terms Green had used to describe the Oakland fighter’s style, as if to say the champion was slick and quick but without sting.
The impressive win puts Ward (22-0, 13 knockouts) into the semifinals of the tournament, continues his systematic march through one of boxing’s deepest divisions and, moreover, takes his ring credibility to a level too high to be questioned. read more