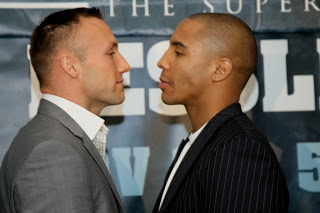 Andre Ward, a 25 year old resident of Oakland California, will tonight make the short drive across town to the Oracle Arena and attempt to take the WBA super-middleweight crown from two-time champion, Denmark´s Mikkel Kessler.
This is the latest installment in Showtime TV´s compelling Super Six Boxing Classic unification series to find the best super-middleweight on the planet.
Young Andre, five years Kessler´s junior, is faced with a daunting task. With a record of  20 wins, no defeats, (13 inside the distance,) he has had less than half as many bouts as Kessler (42-1, 32 ko´s.)
The Dane is rated as one of the hardest punchers in boxing today. His only loss was a close decision against the great Joe Calzaghe in a unification fight at Cardiff’s Millennium Stadium in 2007.  Aside from that, Kessler´s victims read like a who´s who of  the super-middleweight division of the last decade.  Notable victories where a points thrashing of the man who is about to challenge Lucian Bute for his IBF crown, Librado Andrade. Kessler won EVERY ROUND on EVERY CARD! That doesn’t happen very often, and Andrade is a tough cookie. Kessler outpointed Aussie hard man Anthony Mundine, himself a two-time WBA super-middleweight champ, in his own back yard of New South Wales. He stopped former champs Eric Lucas and Markus Bayer, and flattened former WBA middleweight champion Julio Cesar Green in one.
In comparison, Ward, the 2004 Athens Olympic games Gold medalist at light heavyweight, has relatively few marquee names on his resume. His outstanding victory was a decision over the very dangerous Edison Miranda, who´s only other losses were against Kelly Pavlik and Arthur Abraham.  He is five years younger than Kessler, he has never lost, he has undoubted skill, and he is fighting in front of his home crowd.
“I know it’s not going to be easy, but I’m determined,” said Ward this week.
“I’m prepared to do what it takes to win. At 25, my strength, punching power and stamina are at all-time highs, and I’ll need them.  I know from the way his team talks they don’t believe I can beat him. He can’t fathom this, and he’s not ready for what he’s going to be involved with.”
Andre Ward will have to fight a lot better against Kessler than his compatriot Andre Dirrell did against Carl Froch last month. But Kessler is a good boxer as well as a powerful puncher. Kessler should win, but don’t be too surprised if  Ward  causes the first upset of the tournament.
BIG FIGHT ODDS: KESSLER 10/21, WARD 7/4 bet365