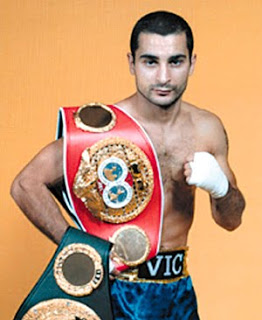 One of the most exciting fighters on the planet takes to the ring in the early hours of Sunday morning when 34 year old Australian based Armenian Vic “Raging Bull” Darchinyan defends both his WBC and WBA super-flyweight titles against Mexican Rodrigo Guerrero at the Agua Caliente Casino, Rancho Mirage, California.

Darchinyan (33-2-1, 27 ko´s) may eventually go down as one of the greatest little men of all time, and the power he consistently displays, initially at flyweight and now at super-flyweight makes him pound-for-pound one of the hardest punchers in the world today, up there with the likes of WBA heavyweight champion Vladimir Klitschko, WBC and WBO middleweight champion Kelly Pavlik, Filipino superstar Manny Paqcuiao, and WBA featherweight assassin Yuriorkis Gamboa.

The sheer weight Darchinyan gets into his shots, both to the head and to the body, is truly remarkable, and results in him being able to get away with a multitude of sins in the ring. At best, he is a capable, if somewhat limited boxer. At worst, he leaves his southpaw right jab hanging out in the air longer than the arm of a crane on a Spanish construction site. He also has a tendency to telegraph his punches, leaving himself open to counters. Most of his opponents are so preoccupied with defending themselves that Darchinyan gets away with it. But not always.

A vastly experienced amateur boxer for his native Armenia, Darchinyan posted a 158-18 amateur log, with a staggering 105 knockouts. When one considers how hard it is to hurt a competitor in the amateur ring with the protective headgear used, 105 knockouts is quite an achievement. His amateur career climaxed with him reaching the third round in the flyweight class at the 2000 Olympics in Sydney, Australia.
It was during those games that Darchinyan fell in love with Australia, and he chose to make the country his permanent base, turning pro there after the Olympics. In 2004 he took out Australian citizenship.
Darchinyan was already 24 when he turned pro in November 2000, and under the tutelage of Aussie ring legend Jeff Fenech, he was moved swiftly through the professional ranks. By December 2003 he was good enough to batter Thailand’s Wandee Singwancha to defeat in five rounds in an IBF world title eliminator.
Darchinyan had to wait for a full year before he got his shot at the IBF flyweight title against the champion Colombian Irene Pacheko, but triumphed via an 11th round TKO in a war between two highly motivated, undefeated fighters. The bout proved that as well as concussive power, Darchinyan also possessed a great chin and tremendous stamina.

After six successful title defenses, all by knockout, in July 2007 Darchinyan put his title on the line against lightly regarded Filipino Nonito Donaire, ranked no.8 by IBF, and a 7/1 underdog. In a shocking turn of events, Donaire, the younger brother of Glenn Donaire whom Darchinyan had defeated two fights previously, breaking his jaw in the process, dominated the bout from the outset. Showing no fear of Darchinyan, he beat the Armenian to the punch constantly, finally nailing him with a booming left hook in the fifth, flooring Darchinyan for the count. It was the first time in his career that Darchinyan had visited the canvas.
For the first time since he had turned professional, Darchinyan had been severely punished for his habit of telegraphing his punches.

Darchinyan chose to move up to super-flyweight, and after just two fights at the new weight, he knocked out Russian Dmitry Kirillov in five rounds to claim the IBF super-flyweight title. Three months later in November 2008, Darchinyan grabbed the WBA and WBC belts from Mexican Cristian Mijares with a storming ninth round knockout.

In February 2009, Darchinyan came perilously close to losing his titles when Mexican knockout artist Jorge Arce was forced to retire after eleven rounds due to cuts over both eyes. It was a desperately close call for Darchinyan, who was behind on all three judges scorecards at the time of the stoppage.
Five months after the Arce scare, Darchinyan tasted defeat for only the second time when he failed in his attempt to win a world title at a third weight, losing a unanimous decision to Joseph Agbeko for the Ghanaian´s IBF bantamweight crown. As usual, Darchinyan was the aggressor throughout, but as in his fight with Donaire, in Agbeko he was up against an opponent who could counter his haymakers effectively.
Darchinyan´s last fight was in December 2009, when he blew away journeyman Thomas Rojas in two rounds. Now aged 34, its not inconceivable, especially in the wake of his fights with Arce and Agbeko, that the mighty Armenian might be slipping. If indeed Darchinyan is on the slide, is Mexican mystery man Rodrigo Guerrero the man to take advantage of it?

Quite what Rodrigo Guerrero (13-1, 9ko´s) has done to deserve a fight with Darchinyan is initially something of a mystery. He is currently ranked 12th by the WBA, and the WBC have him way back in 15th. A close inspection of his record shows that his standout victory was an eight round decision over fellow Mexican Luis Maldonado, a perennial flyweight contender who has come up short in IBF title fights against both Darchinyan and Donaire. Guerrero also holds a 2008 decision over the very useful Mexican Juan Alberto Rosas, currently the IBF´s no.1 contender at super-flyweight, so it would be wrong to completely write of his chances.

The bout with Darchinyan is a huge step up from anything that Guerrero has experienced before. There is a chance that the Armenian´s eye might not on the ball, and he may be thinking ahead to a proposed rematch with Donaire later this year.
Barring that, there only looks to be one possible winner; Darchinyan by KO inside of five rounds.